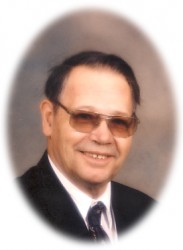 BROWN – It is with extreme sadness that the family of Lloyd Walker Brown announce the passing of our beloved husband, father, grandfather and great-grandfather. Lloyd passed away at Souris PCH on September 14, 2013 at the age of 88. Lloyd was born at Souris to John and Clara Brown, January 11, 1925. He had one sister, Dorothy. He grew up on the family farmwest of Souris, attending Whitefield School until Grade 9 at which time he went to Souris Collegiate to finish his High School education. At that time, a person had to pay to take Grade 12, so Lloyd moved to Souris and worked after school and weekends to graduate. He was active in the Beef Club. In 1944 he won a trip to Toronto and along with Jack McSorley from Virden, represented Manitoba in the Beef Judging Competition. He loved to play softball and baseball and also tried to play hockey for a while in his younger years. Lloyd worked as an electric apprentice for Dodd’s Electric for a number of years, helping to wire many local homes and businesses during the “Rural Electrification” program. Lloyd married Muriel Loreen Rathwell on June 1, 1955. They lived on the Brown Farm where Lloyd and Loreen farmed with his parents. Lloyd and Laureen raised three children. Dwayne was born in 1956, Don in 1957 and Joy in 1959. Lloyd and Loreen continued to farm until they retired. Lloyd was active in many community activities. He served as Sec-Treas for Whitefield School District, was church elder at St. Paul’s United Church and a Sunday School teacher. He was an active member of the Souris Elks Lodge, I.O.O.F. and the Canadian Order of Foresters. Lloyd enjoyed social events such as the Whitefield-Breezelawn dances, helping with Elks Bingo Nites and attending auction sales near and far. When Lloyd slowed down working on the farm, he enjoyed going to have coffee in Souris. In 1999, Lloyd and Loreen retired and moved to Souris. Lloyd joined the Drop In Club, now the Fellowship Club, where he loved playing cards and visiting. He continued going for coffee twice every day to hear what was happening in the community. Lloyd also loved taking trips in his Lincoln, often asking one of his friends to go look at crops or explore the countryside. After a short stay in hospital Lloyd moved into the Personal Care Home where he resided until his passing. He is lovingly remembered and missed by his wife Loreen, children Dwayne, Don and Kim, Joy; grandchildren Ben, Tom, Dan, Eric, Crystal, Lora, Jessie and Marcie; great-grandchildren Raely, Lucas and Jordyn. A celebration of Lloyd’s life was held at St. Paul’s United Church on September 20, 2013 with Rev Barb Alston officiating. In lieu of flowers, donations to Elks Fund for Children or a donation of your choice.

Leave a Reply to Bruce and Cindy Locke Cancel reply