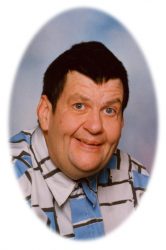 Gerald Robert (Gerry) Fortin was born on Jan. 20, 1960 to Rene and the late Simone Fortin of the Souris-Elgin area, the third of 4 children.  Gerry attended Elgin and Souris schools, and then spent a little time at Cor Enterprises in Brandon.   From there he moved to Ninette, where he has been at home for most of the past 30 years, first at the Pelican Lake Training Center, then at Southwest Community Options.  While in Ninette, Gerry was fortunate to try out many new things:  some artistic and craft projects, some sports through the Special Olympics program and curling and bowling, as well as some jobs like his paper route and his job at the Ninette Motor Inn.

Gerry loved people, especially children, and he loved to tease.  His giggles were infectious!  He also loved animals of all kinds, especially his cat Suzie, and his family and friends, and especially those who have worked with him over the past many years.  He enjoyed the special efforts of so many who took him home for such things as quad rides and visits with their families.

A trip to Toronto let Gerry see his favorite team in action:  the Toronto Blue Jays and the Maple Leafs, both of which he followed on TV.  He also enjoyed watching his nephews play hockey whenever he could.  In 2015, Gerry was fortunate to travel to Las Vegas.

On March 26, 2016, Gerry passed away suddenly in Killarney.  Gerry was predeceased by his Mom, Simone in 1981 and by his younger sister, Denise in 2003.  He is survived by his Dad, Rene (Fern), his brothers Ron (Joanne) and Norm (Cheryl), 3 nieces, 4 nephews 2 great-nieces and and  1 great nephew.  A private service was held for Gerry at the Souris-Glenwood Cemetery on March 30, 2016, followed by a memorial service in Ninette on April 1, 2016. In memory of Gerry, donations may be to the Southwest Community Option Inc. or to a charity of your choice.

Rest in peace, Gerry.   You will be missed

Leave a Reply to Allan and Brenda Halliday Cancel reply