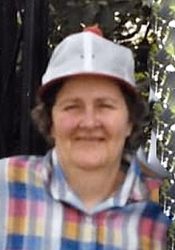 Gardiner; On November 29, 2015 Nellie May Gardiner (Lamb) passed away peacefully surrounded by family at the Souris Personal Care Home.

Nellie was born on September 25, 1934 to James and Zeta Lamb at her grandparents Paterson’s home in the R.M. of Oakland  southwest of Wawanesa Manitoba Nellie was eldest child of four children .She grew up on the family farm in R.M. of Riverside north east of Dunrea Manitoba.

Nellie did her schooling at the Minore School which was down in the valley and attended high school in Ninette. After finishing school, Nellie was employed at the hotel in Minto, where she met Irving Gardiner of Minto. In the following year they married on July 25, 1953. After marrying they moved to East half of 7-5-20 in the R.M. of Whitewater, where they started building their home together. Soon after they were blessed with Leo (1955) Ellen (1957) Dwight (1961). After the birth of the youngest child, she was diagnosed with Multiple Sclerosis. Even with M.S. it created limitations, but she did not let it dictate her life. With Nellie’s positive attitude, she was involved with all aspects of the farm. From caring for animals, helping in the fields, gardening, this provided the food for the family. Nellie spent many hours canning, sewing being involved in 4H. If there was anything she loved doing she did it with passion. She was a woman with many talents. When she found time she loved participating at the Croll community club. Later on in life, As the M.S. progressed, homecare was provided just over a year for Nellie on the farm. In 1996 she then decided to move to Souris into the Crescent manor, where she spent the next 10 years of her life. There she was active in the manor, and the M.S. society. In 2006 as the M.S. got worse she moved into the personal care home. Even with her many struggles with M.S. she continued her positive spirit. She made many friends with residents and staff. She brightened everyone’s day with her smile.

Nellie was predeceased by her parents, son Leo, sister Mryna and brother Thomas.

Funeral service was held at St. Paul’s United Church Souris, Manitoba on Monday December 7, 2015 with a private interment at a later date.

Donations in memory of Nellie may be made to the Multiple Sclerosis Society.

5 thoughts on “Gardiner, Nellie May”