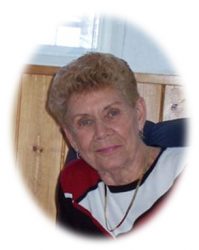 Beloved wife of Matt Hrabarchuk, passed away peacefully on August 9th, 2016 at the Souris Health Centre, Souris, Manitoba at the age of 82 years, with her family by her side.  Florence was born on 7 March 1934 in Binscarth, Manitoba.  Florence was predeceased by her son Ron; sisters Kay, Evelyn and Shirley; Brothers Butch and Orville.  Florence is survived by her devoted husband of 52 years, Matt; Sons Bob (Jacquie) from Maricopa, Arizona and Rick (Marilyn) from Brandon, Manitoba, as well as three grandchildren, five brothers and numerous nieces and nephews.  Cremation has taken place.  A private funeral will be held at a later date.  Florence and Matt left Brandon, Manitoba for Lynn Lake in 1970 for what was to be a 2 year posting. They ended up staying for 12 and 1/2 years.  After that they arrived in Souris in October 1982.  They made many long lasting friends in both communities.  Following retirement, Florence and Matt spent their winters in south Texas for numerous years, again adding to their collection of good friends.  A celebration of Florence and Matt’s 50th wedding anniversary took place in 2013 at the Souris & Glenwood Golf Club.  Florence spent many days and nights at the Souris Hospital without complaint.   The family would like to thank the doctors and the Souris hospital nursing staff for their kind and compassionate care of Florence.  Florence was a remarkable woman and devoted wife; she had a wonderful spirit and a kind and loving heart.  Florence will be dearly missed by all that knew her.  In lieu of flowers, donations may be made to a charity of one’s choice.