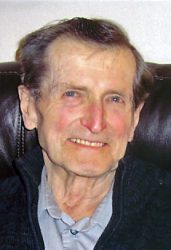 Isabey, John Narcisse Edmond, passed away peacefully at the Souris Health Centre on Friday, March 20, 2015, at the age of 84 years.  Dad was the oldest of four children.  He was predeceased by his wife of 40 years, Donalda, parents Narcisse and Germaine Isabey, in-laws Mae and Sawrey Watson, and brother-in-law Roland Hennessey (Marguerite).

Dad took his early schooling at St. Jean’s convent at Grande ClairiÃ¨re, Wauchope, SK. and finished at St. Boniface and St. Paul’s colleges in Winnipeg.    In 1949, dad joined his father to work in the family business, Hartney Machine & Motors.

In 1959, he married Donalda (Donnie) Watson and had two children, Larry and Bev.

Dad was a member of the B.P.O. Elks in Hartney for many years.  He was a goal tender for the men’s senior hockey team and would later become a manager.  He enjoyed hunting pheasants and made many trips to Alberta and the States with his close friends.

There were many family camping holidays with the gang (mom & dad’s close friends).  Dad’s boat kept everyone busy with water skiing for the kids or lake cruises with the adults.  Dad loved to drive and sight see, so family trips also included road trips out west to visit family and into the States.  Where ever we travelled, he was never far from his faith as we would say prayers and the Rosary for safe travel, and would always look for a church for Sunday mass.

Playing board games, cards and especially crib was a family favorite and he was always up for a game.  Dad also enjoyed playing with his model trains, building and adding to his miniature community.

Family was very important to dad.   He loved to watch his children & grandchildren play sports or music, he was our greatest supporter.

Dad was a devoted business man and many times, worked beyond regular hours to help customers.  He was extremely proud when Larry became the 4th Isabey generation to be part of Hartney Machine.  Through the years the business was acknowledged for numerous awards: 75 years with Ford, Manitoba Centennial Business and 120th Anniversary in the garage business in 2013.

Though not as active in the business following his heart attack in 2010, dad was still involved in decision making and his opinion was valued.

Dad lost his best friend and wife when mom passed away suddenly of a heart attack in 1999.  With his passing, dad has been reunited with mom in the life of the everlasting.

Funeral mass was held at St. Jean’s Catholic Church, Grande Clairiere, Manitoba on March 25, 2015 with interment in the Grande Clairiere Cemetery. In memory of John, donation may be made to the Heart & Stroke Foundation or to the Souris Palliative Care Fund c/o Prairie Mountain Health Box 10 Souris, Manitoba R0K 2C0 or to a charity of your choice.

Special acknowledgement to Dr. Cram and the Staff and the Souris Hospital Centre for their care and compassion to dad and the family during dad’s final journey.