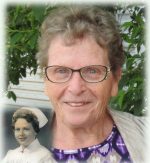 IZZARD: Margaret Clara Izzard (nee Dixon) passed away with family by her side at the Souris Personal Care Home on April 23, 2021 at the age of 82. Margaret was born on January 17, 1939 in Souris to parents Bob (a CPR railroad conductor) and Laurie Dixon. She was raised in Souris with her younger sister, Karen. She enjoyed a happy childhood surrounded by a large extended family. Margie (as she was called by many of her longtime friends) had a large circle of friends, many of whom she kept in contact with her entire life. Margaret participated in the usual aspects of small-town activities such as 4-H, sports, and Anglican church activities.  After graduating from Souris Collegiate in 1956 she enrolled in Nursing School at Brandon General Hospital, graduating in 1960. Again, she remained in contact and close to many of her fellow nursing students. Keeping close to friends from all aspects of her life was a common theme of Margaret’s no matter how much physical distance developed between them. Margaret spent her nursing years working in Brandon, Sarnia (ON), Souris and Hartney.  During the short stay in Sarnia she took the opportunity to tour many parts of Central Canada. She met her husband Frank Izzard while nursing in Souris. Frank and his friends were planning to attend a dance in Carroll and required dates. They decided to phone the Nurses’ Residence to see if any nurses wished to join them. It must have been a good first impression since they were married on February 15, 1964. They moved around a bit with Frank’s heavy construction business. Margaret assisted Frank in the business by doing the books and occasionally driving a truck. They eventually put down roots in Lauder which was a central location for the business. This is where they raised their children, Bob and Wanda, until they purchased and moved to Frank’s family farm near Alexander, MB in 1978. She assisted with the farming activities along with helping with the business. This continued until the kids could assist with one exception, the meals and baking (no one could match that). Margaret had many hobbies which included knitting, crochet, reading, baking, & gardening. Family was always a big part of her life but especially for her cherished grandchildren. She made sure to attend as many of their events/activities she could (hockey, curling, 4-H, & figure skating). She enjoyed being part of all events that included her family & friends. In the last few years, she was functioning well and enjoying life at Riverheights Terrace in Brandon.  In November 2019, she was admitted to hospital with a knee infection. Complications and pandemic restrictions caused a steady decline in her health. She had just been transferred to the Souris PCH when she wasn’t able to recover from the latest infection. The family wishes to thank the staff of the Souris PCH for the excellent care Margaret received in her short stay. The best words to describe Margaret would be feisty, fun, loyal and loving. She will be greatly missed by family and friends. Margaret is survived by son Bob (Cindy) Izzard; grandchildren Bryden, Courtney and Adam; and daughter Wanda (Brad) McKinney; granddaughters Taryn & Megan. She was predeceased by her husband, Frank Izzard; her parents, Bob and Laurie Dixon; her sister Karen Sokalski and her in-laws, Bill and Viola Izzard. A small graveside funeral was held at the Griswold Cemetery on April 30, 202l. Pallbearers were Bryden Izzard, Adam Izzard, Mark Yeomans, Bo Yeomans, Mark Wolfe and Ken Cross. Donations in memory of Margaret may be made to a charity of one’s choice.