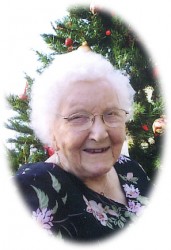 On Tuesday, Dec. 4th, 2012, Meta passed away peacefully at the Hartney Community Health Centre, Hartney, Manitoba (her much appreciated home since February, 2001). Meta was born on Nov. 20th, 1906 in the Windygates District, south ofDarlingford,Manitoba. She was predeceased by her parents Angus McPherson Sinclair (1864 – 1926) and Rachel Wilson (1869 – 1956); adopted brother Eldon Cecil Sinclair (born Thomas Ray) (1898 – 1980); brother Milton Clifford Alvin Sinclair (1912-2012); husband William Andrew McCulloch (1898-1962); husband Goldwin Smith McCulloch (1910-1983); daughter Meta (Mae) MacNair (1936-2008). Meta’s early years were on the family farm at Windygates until her marriage to Willie in 1934, when Meta and Willie started their home in the Kingsley district southwest of Somerset, Manitoba. They raised their family at Kingsley and after Willie passed away in 1962,Meta left the farm. In 1965 Meta married Goldie and they lived on Goldie’s farm near Port Elgin, Ontario until 1967 when they moved toSouris,Manitoba. After Goldie’s passing in 1983 Meta continued to live in theirSouris home until 2000 when severe arthritis required that she move to the Hartney Health Centre in 2001.

Meta was active throughout her life with theUnitedChurch, the Ladies Aid, and the U.C.W. She was involved with various groups, including, The Manitoba Genealogical Society, The Monarchist League of Canada,Sourisand Glenwood Horticulture Society.Metahad a real love of gardening and flowers.