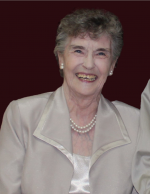 As we began writing this, we struggled to condense this into something that is an appropriate length.  So we apologize in advance if this appears to be long and rambling, please bear with us, as we try to share a little bit of Mom with you.

Lillian Marie Peaslee was the third daughter to Lilly & Harry Fradley of Souris and was born on a Friday, March 22nd, 1946.  She proudly lived in the Souris area her entire life.  Her early years were spent growing up on their property adjacent to the Souris Cemetery as her father was the caretaker and gravedigger there.   She remembers watching him carefully and meticulously dig the graves.  Each was precisely measured and squared perfectly, which couldn’t have been easy back in those days, as it was all done by pick and shovel in that gumbo clay.   In fact, Marie’s father’s grave was the very last one to be dug by hand in the Souris cemetery.  They started using equipment after that.

As a young girl, Marie remembered quietly waiting in the designated shack nearby, during graveside funeral services.   Then, after everyone had left, she would assist her father by first carefully removing all of the flowers & wreaths so that he could close the grave; and then it was “her job” to place the flowers and wreaths back on the grave for display.   She had so many wonderful stories about her Mom and Dad and her sisters Dorothy and Fay.  Their fox farm, and their annual summer holidays up to Clear Lake.  Her parents died when she was in her teens, so for several years she lived with her older sister Fay,  brother-in-law Albert Long, her goddaughter/niece Frances and her nephew Clifford.  She referred to them as her children before she had children.

She moved to the big city of Brandon in the 1960s, lived at the YWCA before finding a small apartment, while she worked at the Bus Depot; later as a dispatcher at Imperial Taxi for several years and finally at MTS on 9th street.  She married Bert Peaslee in September of 1970 and raised us on the family farm 12 miles south-west of Souris until the late 1990s when they moved into town.

Mom ran a tight ship on the farm when we were growing up.   Meal times were precise, daily & weekly chores and activities were scheduled.  She spent hours manicuring the four acres of farm yard and flower beds.   She maintained a huge garden, raspberry bushes and a field of potatoes which always yielded a bountiful harvest.   And of course, as you can all relate; she was the chief “gopher” running here, there and everywhere for parts and materials for the farm.   Moving equipment from one field to another, helping with the animals and repairs as necessary; while never failing to have dinner on the table at 12:00 or supper on the table at 6:00.

In the mid 1990s Marie was diagnosed with Wagner’s disease – which was quite rare at the time.  It affected her kidney function and she was forced onto dialysis.   At that time, conventional thinking meant that was it, you were on dialysis for life & because of her Wagner’s diagnosis, her life expectancy was not great either.    She was able to do this particular type of dialysis at home and successfully did for two years, when miraculously, one of her kidney’s began functioning again.   Unheard of.  Marie had one kidney specialist tell her that her particular case had been one that was used as a reference for med students, teaching them what was possible in the area of kidney recovery.   Marie became the poster patient for this amazing phenomenon.   She got a kick out of visiting the kidney specialists in Winnipeg for her annual checkup, because she would often get approached by staff wanting to ask questions, or hear the staff whispering “oh, SHE’S the one!!!”.

Recreation:  Mom liked needlepoint, puzzles, playing cards.   She was always a big fan of soap operas.   She called them ‘her stories’.    As far back as  “The Edge of Night” & “Another World”, to present day “General Hospital”, “Young and the Restless”.   She also liked to watch curling.   I’m not sure if she had always liked to watch curling, or if she just resigned herself to becoming a fan over the 50 years of sitting and watching Dad curl.   But her specialty was KNITTING!!!    She could knit a toque and matching set of mitts while sitting and watching Dad curl a ten end game at the rink!   She was very talented and VERY fast!!   She taught us all how to sew and how to knit.   I am not very good, but one of her granddaughters is quite good and definitely takes after her grandmother in that regard.   She is also famous for her Christmas cake, for her homemade bread, apple pudding and stew with dumplings.     She is not so famous for her jello.   (family joke)  One Christmas her lime jello must have been made from an expired package or something, because it did NOT jiggle as jello is supposed to.   Rather, it just kind of sat there and was glued to the serving dishes.  We can still recall the roars of laughter at “ jello that didn’t jiggle,” and it became a running family gag.

Another story that was shared recently by a friend, was an example of what a great neighbour Mom always tried to be.     Marie had gone to their house at Underhill one day to assist them with installing some gyprock on their ceiling in the dining and living room.   Somehow, early in the day, the seat of her pants had ripped – and true to form, without missing a beat, she just borrowed a pair of the husband’s coveralls and carried on for the rest of the day until the task was completed.

Marie was predeceased by parents Harry Fradley and Lillian Johnson Fradley; sisters Dorothy Swaenepoel and Fay Long, brother-in-law Albert Long; She is survived and lovingly remembered by husband Bert Peaslee of Souris; Two Children Leanne (Tom) Zelenesky of Gillam, Rod Peaslee of Oak Lake;  Six Grandchildren, three of whom she helped raise, Darby Peaslee of Brandon/Calgary; Dan Peaslee of Souris, Drake Peaslee of Souris, Ashley (Braden) Haigh of Rivers, Stephanie (Barrett) Miller of Gillam,  Matt (Sarah) Zelenesky of Gillam;   Three great-grandchildren Adeline Miller, Rogan Haigh and Torren Haigh.  Marie was VERY close to so many nieces, nephews & cousins….the list is endless…. You know who you are.  When I asked her if there was anything that she wanted me to tell any them,  she thought for a minute and just shook her head and said “Just that I love them all!”

For about the last ten years Mom’s back started giving her quite a bit of trouble.   Though she was unable to enjoy dancing or standing for long periods, she refused to let it slow her down too much.   Her and Dad celebrated their 50th wedding anniversary last September.   We had been so ultra focused on the return of her kidney issues in December;  how to get her back on the home dialysis so that she could regain her strength and recover (like 26 years ago), that most of us missed, or subconsciously ignored all of the warning signs of serious trouble.  By the time she was actually officially diagnosed, her poor body was so weak it just wasn’t equipped with enough energy for a battle.   True to form, she is the strongest woman we know.   Stubborn and determined to live long enough for her immediate family to make it to her bedside.  We take comfort in the fact that, despite the challenging covid rules and regulations, we managed to make the best out of a truly crappy situation.

We choose to try and see the positive in any circumstance.  So, it was a blessing to have been such a short time between the official diagnosis and her death.  Just long enough for opportunity to privately spend time with her, sharing laughs & stories and acknowledging how much this all sucks.   It afforded us time to pose important questions and have some treasured discussions.    Facetime and telephone calls like explaining to her grand daughter, over the telephone from her hospital bed, her homemade bread recipe and that secret ingredient was love?   Or where are those darn skidoo keys that were put in a “safe” location never to be seen again?

In closing, as I said, these last days we discussed a lot.  I asked her if there was anything in particular that she wanted to be remembered for.   She smiled and thought for a moment….    I expected something profound;  something obvious;  being a good wife?   good mom?   good neighbour?  good community citizen?  good friend?   (ALL OF WHICH ARE AN UNDERSTATEMENT) …. But no,  ….modest and self deprecating,  Mom shrugged, looked at me and said with a confident smile, “I make pretty good Christmas cake!”

Due to the Covid-19 restrictions a funeral service will be held at a later date. Notifications will be posted prior to the service. In lieu of flowers, in memory of Marie, donations may be made to your local Royal Canadian Legion.