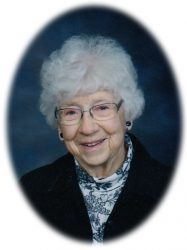 Roney: Evelyn June Roney (Goodwill) passed away peacefully with family by her side at the Souris Hospital on December 18th, 2015. “Aunt Ev” as she was affectionately known to everyone was born on the family farm in Glenwood municipality on June 26th, 1926. She was the 6th of 11 children of Bill and Minnie Goodwill.

Her early years were busy with farm life and family, while completing her education at Huntingdon, Glenvale, Wolflea and Souris schools. After summer school in Winnipeg, she taught as a permit teacher for 1 year at Bunclody School at the age of 17. On April 11th, 1945, she married Earle Roney. Together, they worked on local farms in the Souris and Wawanesa area along with starting to farm with Earle’s parents on 10-8-22 west of Souris. They boarded in Souris for several years during which time Evelyn enjoyed working at Tomlinson’s Red and White Grocery while Earle started trucking, hauling grain and livestock. In 1954, they moved to the farm where she lived, worked and gardened until Earle’s death in 1992, after which she continued to live on the farm in the summers until 2012, when she moved to Souris permanently. Aunt Ev loved the farm life, the ever changing seasons and especially the Hereford cows which were all named along with a herd history for each one. Raking hay was her all time favorite relaxation therapy completing a string of 70 consecutive years raking hay on the “hay quarter” last summer! A milestone and memory she was very proud of. She was terrified of Plum Creek even though she lived and worked next to it for over 60 years. She was a long time member of the Rebekahs and a supporter of numerous local community organizations and projects.

Aunt Ev was a very private, compassionate, caring and loyal wife, sister, aunt neighbor, and friend. She always had time for kids, card and board games, dogs and visitors who were always asked to lay off their coat and stay to eat at anytime of day or night.

Aunt Ev was predeceased by her parents Bill and Minnie Goodwill, husband Earle, 4 brothers and 5 sisters. She is survived by sister Dorothy Johnston of Thunder Bay, sisters-in-law Pat Goodwill of Edmonton and Joan Goodwill of Souris along with many cousins, nieces and nephews and their families from coast to coast.

A private family internment took place on Friday January 15th, 2016 prior to a funeral service/celebration of life at St. Paul’s United Church in Souris. Special thanks to the doctors, nurses and staff at the Souris Hospital, also staff and residents at the Victoria Park Lodge. The family extends thanks to Wendy Rankin, United Church choir and organist, and UCW for the service and lunch. Thank you for the cards, flowers, food and expression of sympathy. Special thanks to the Kowalchuk’s Funeral Home for their kindness and services. Donations in memory of Evelyn may be made to Victoria Park Lodge, Souris Hospital Palliative Care or a charity of your choice.