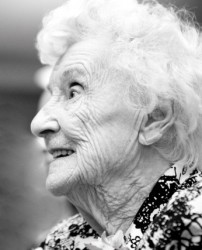 Edythe  Passed away Sunday April 13 2014 at Souris Health Center at the age of 91. Edythe was born October 26 1922 in Treherne  Manitoba  to Ernest  and Edythe Harness.  While still a baby the family moved to Brandon where she grew up and  after graduating high school she spent a few years living and working  in Winnipeg.

Returning to Brandon she met and in 1948 married the Late Ronald Smith of Souris. Together then spent the next 18 years farming and raising their three children in the Riverview district.

After moving to Souris in 1966 Edythe went to work at the Souris Motor Inn and remained there for the next 25 years.

After retiring she kept busy by involving herself in the lives of her children and grandchildren. Although her main passion was bingo and having coffee with  friends.

Edythe was predeceased by her husband Ron as well as her parents and three brothers Vernon, Hank and Lloyd Harness.

The family would like to express their gratitude to Dr. Cram and the staff of the Souris Health Center for the excellent care. kindness and patience towards Edythe in her final years. Also thank you to the homecare workers who’s  visits she looked forward to.

Donations may be made to a charity of your choice.