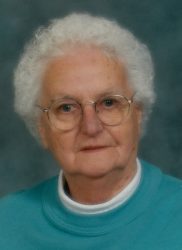 It’s with deep sadness that we announce the peaceful passing of Doreen Strath on  Thursday February 4th, 2016 at the age of 89.

Doreen was born in Lyleton, Manitoba March 21, 1926 to Robert and Gladys Moore.  Doreen grew up on a creek side farm with her younger sister Norma.   She began her education in Lyleton Manitoba often boarding in town with her sister during the winter months when travel was not possible.  She graduated with full honours from high school and was one of two in Manitoba to receive a provincial bursary.

Growing up in the thirties taught her that resilience and hard work paid off when she was able to hunt and trap for the family.  She was quite fond of snaring gophers and muskrats for a penny a tail and learned to be crafty enough to split tails to get two cents. The money earned bought school shoes for the fall.

She was an outdoor gal from a very early age and spent many hours helping her father in the fields and with the livestock.  Cooking and sewing were never her forte.

Doreen chose a career in nursing and in 1944 with bursary in hand she moved to Souris to begin nurses training.  She attended and graduated from the training center in the original Souris hospital.  She went from black stockings as a nurse in training to a graduate with white stockings in 1946.  She continued her nursing career into the mid 1970’s.

Over her 30 year career Doreen was known for her professionalism and compassion when dealing with patients.  She spent many unpaid hours sitting with and caring for others.  Her quiet kindness was not often known by others but affected many people through her whole life.

In 1945 she attended a local dance where she met a returning soldier, George (Geordie) Strath from Hayfield Manitoba.  They married in 1947 and settled in Souris.  They lived in town until 1957 when they decided to farm in the South Beresford area.  During this time they had two girls, Joan born in 1955 and Lorie born in 1960.

Doreen was a modern woman of her time as she maintained a nursing career while raising two girls and helping Geordie on the farm.  She was adept at fixing machinery or finding a good welder or shooting predators off the top of the barn that threatened her prize chickens.   Her girls fondly remember sitting in the back of the car with Geordie driving while mum was shooting out the window at skunks in the hayfield.

A farm accident in the late 60’s saw Geordie change his career from a farmer to a certified carpenter.  Doreen’s educational background helped Geordie through the tough parts of his training.  After a few years they moved back into Souris

In 1976 she made a bold career move and applied for and obtained the position as Manager of the Souris Housing Authority.  Immediately she was involved in the expansion of the Crescent Manor as well as several housing developments.

During her years in Souris she was an active member of many organizations in the community.  She was a Charter and Life member of the Royal Purple and a 30 year member of the Royal Canadian Legion.  While in the legion she worked on the Poppy Fund as well as the reconstruction of the cenotaph at the Souris cemetery.  Doreen took a personal interest in securing benefits for the veterans and worked tirelessly to ensure they were compensated for their service to their country.  She was not afraid of any government official.   She and her sister Norma began the first girls community softball team in the 1970’s.  The organization ran for over 30 years and was a testament to both ladies of their love of the sport and equality for young women athletes.  No favoritism was shown, everyone played and ability was never an issue.  She retired in 1989 to begin her favorite career, fishing.

She loved to fish and spent many hours at her cabin on Elm Street at Oak Lake.  Her sign in the window welcomed all to Dinty’s Place.  Everyone was welcome to come in and share a ‘yarn’, their latest fish story or just to have a glass of rum and coke.  Many hours were spent down at the marina with the local kids teaching them the art and patience of fishing.  Her three favorite studies were Cory, Shawna and Scott.

For three years she was a friend to all the residents and staff of Victoria Park Lodge and spent the last month and a half at the Souris Personal Care Home.

She is predeceased by Geordie in 1988 and is survived by Joan (Jack) Grandmont, Lorie (Duane Davison) Strath, a grandson Cory and a great grandson Kelton, her sister Norma, her sister in law Roberta Dodd and brother in law Don Strath of Calgary plus many cherished nieces and nephews.

A memorial reception for family and friends was held at the Souris Legion on Friday February 12th 2016.   Private interment in the Souris & Glenwood Cemetery.