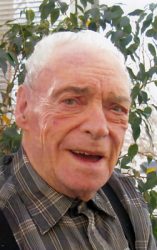 In 1952 their first son Ken was born and in 1954 a second son Rod blessed their family also.

Earl was a member of Manitoba Pool Elevators Canada, order of Forresters and the Lauder United Church. Earl enjoyed music and played his violin or saxophone in his leisure time.

Earl enjoyed farming with his land and livestock, and helping in the community, but most of all his family and friends.

In 1988 Earl and Dorothy moved to Hartney   retiring in 1995. They had many holiday trips and met many new friends.

Earl was predeceased by his parents William and Mildred and brother in-law Austin.

A private graveside service was held at the Lauder Cemetery followed by a memorial reception for family and friends at the Lauder Community Hall on November 1, 2016.

In memory of Earl, donations may be made to the Lauder Cemetery Fund.