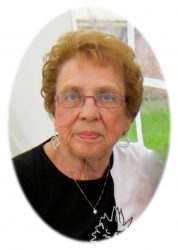 Anne Davidson was born June 14, 1920 in Springburn, Glasgow, Scotland and passed away peacefully at the age of 94 on December 28, 2014 at the Souris Health Centre in Souris, Manitoba with family and friends at her side. Anne immigrated to Canada at the age of 3 with her mother, brothers and one sister to meet her father and 2 older sisters in Hartney, Manitoba. It was here that she spent her growing up years.  She met Allan Davidson and were married in 1946 and moved to Souris, where they raised their 2 children, Garry and Alana. They owned and operated Davidson Jewellers.  Anne leaves to cherish her memory, her children Garry (Brenda) Davidson and Alana Bennett, 4 grandsons, 7 great grandchildren, nieces and nephews and many great friends.  Anne was predeceased by her loving husband Allan after 64 years of marriage, her mother and father and all her brothers and sisters.  After a private interment at the Souris & Glenwood Cemetery, her celebration of life was held at St. Paul’s United Church in Souris, Manitoba on January 2, 2015. Memories, tears and laughs of Anne were shared over lunch at the Royal Canadian Legion.  If friends so desire, memorial donations may be made in her memory to: Funds For Furry Friends: 208-740 Rosser Avenue, Brandon, Manitoba R7A 0K9. (www.fundsfurfriends.com).