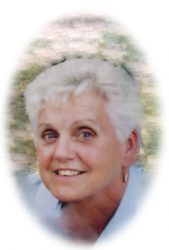 DENBOW:  It is with loving thoughts and heavy hearts that we announce the passing of our beloved mother, Rita Cecile Denbow, on June 17, 2015, at the age of 83.

On September 21, 1931, Rita Cecile Bertholet was born in Grande Clairiere to Laura (Marcq) and Joseph Bertholet, who had immigrated from Belgium. She was the second youngest child of twelve. As a child, Rita attended the Convent and, in later years, would reminisce fondly of her time spent there. Through her whole life, her faith continued to guide her.

On August 2, 1947, Rita married Wilfred Earl Scott Denbow in Grande Clairiere. Rita, coming from a family of twelve, had no fear of marrying into the Denbow Clan of twelve, who welcomed her with open arms. Together, Mom and Dad worked on the family farm and raised their eight children. They were a team, spending countless hours milking cows and doing other chores. Rita always had a clean house, a huge garden and a pantry full of canned goods.

Family was always important to Rita.  Each year, on Christmas Eve, fifty or more people would gather at her home and share in amazing feasts served on real china with wine glasses and silverware. We enjoyed cut-throat gift exchanges, games and laughter, road hockey, and even arm wrestling competitions.  Each year, Rita would buy every one of her kids, grandkids and great grandkids a Christmas gift and never expected anything in return. Rita always had an endless supply of baking, cookies and lemon loaves in particular, just in case company would happen to stop by. One of the most cherished gifts her grandkids have is the afghan she knitted for each one and gave to them on their high school graduation day.

Being the athlete and avid sports fan that she was, Rita raised numerous successful athletes of her own and took great pride in her kids’ and grandkids’ accomplishments. In 1983, Rita and Scotty moved into Souris where Rita became quite active in the community.  She was involved in a number of groups (Legion Ladies, CWA, Whitfield and Breezelawn Ladies, The Fellowship Club, and the Across the Creek Gang). Rita was employed as a nurse’s aid at Victoria Park Lodge and loved her house in town and all of her wonderful neighbors.

Rita was a caring person, who was beautiful inside and out. She was admired for her cheerfulness, her devotion to her family, her strength of character, her hardworking ethics, and her sense of fun. She had a beautiful smile, with sparkly eyes, and was always delighted to see you. She will be forever in our hearts and on our minds.

Prayers were held at St. Mary’s Catholic Church on Friday, June 19th, 2015. On Saturday, June 20th, 2015, Funeral mass was held at St. Mary’s Catholic Church and Interment at Souris & Glenwood Cemetery.  Our family would like to express our sincerest thanks to Dr. Cram and the entire staff at the Souris Health Centre for your compassionate care.  Thanks also to Kowalchuk’s Funeral Home, Father Michael, the choir, St. Mary’s CWL and Legion Ladies Aux.  Thank you to all family and friends for your overwhelming support through donations, meals and baking, cards and flowers, calls, visits and other acts of kindness.

In memory of Rita, donations may be made to the Heart & Stroke Foundation.