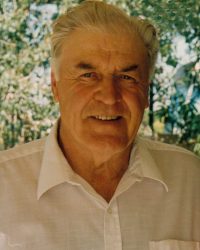 Rene Fortin was born on January 18, 1929 to Napoleon and Flore Trudel-Fortin in Dry River, Manitoba. In time he was joined by his sister Doris and brothers Roger and Donald. The family settled on a farm near Baldur. In 1951, Rene married Simone Liban and welcomed their first son, Ron. They then moved to a farm in the Elgin area where they grew to a family of six. Following Ron came their sons Norm and Gerry and daughter Denise.

Rene was a dedicated family man and enjoyed working with livestock & grain farming in his early years. As the opportunities arose he continued to build his farm where Ron and Norm still do so today.

After Simone’s passing in 1981, Rene kept busy on the farm, as well as held a seat on council for the RM of Glenwood. He was a Souris Elks Member, and a Legion Member. In 1984, Rene married Fern Dunbar and the two families came together.

Rene and Fern enjoyed travelling south for parts of the winter for several years, to Mesa, Arizona. During this time, Rene spent much of his summers helping out on the farm, jumping on a combine any chance he got. He always had a progressive attitude towards farming and encouraged new research and technologies.

Rene was predeceased by his first wife Simone in 1981, his daughter Denise in 2003, and by his son Gerry in 2016, by his parents, his sister Doris and brother Donald. He will be remembered by many; his wife Fern, her children Connie, Colin, Darcy and their families. His sons; Ron and wife Joanne, Norm and wife Cheryl, Ron’s five children, Danielle, Whitney, Michael, Dane and Callum and by Denise’s children Michelle and Taylor. His great-grandchildren, Vaida, Paisley and Hunter and his brother Roger, wife Aline and their daughter Elaine (Mike) of British Columbia.

A private graveside service was held October 22, 2016 at the Souris & Glenwood Cemetery with grandson Michael Fortin as the Urn Bearer followed be a memorial service at Kowalchuk’s Funeral Chapel with Rev. Harvey Hurren officiating. Eulogies were given by grandchildren Danielle and Michael Fortin and by family friend Rev. Don McIntyre. In memory of Rene donations may be made to a charity of your choice.