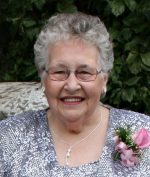 Margaret Janet Matheson was the first of two daughters born to George and Bertha Watkin of Brandon, Manitoba on June 20th, 1932.  She grew up in Brandon’s south end alongside her sister, Sandra, and many cousins, aunts and uncles.  Marg loved to tell stories about the hardships of growing up in the Dirty 30’s and during the Second World War, and how she was the same age or even older than a couple of her aunts and uncles (her mom was the eldest of an exceptionally large family).  Most of her childhood stories centred around visiting various family and friends for tea with her mom or visiting her Grandma and Grandpa Sproule’s house and playing with her cousins.

Marg attended elementary and high school in Brandon and graduated in 1949.  She met Norman R. Matheson at a party near Souris shortly after, and by August 1952 they were married and living in Souris.  There they raised two children, Norman G and Janet (and unfortunately lost a baby boy named Fred the same day he was born, but whom she always lovingly remembered).  Marg had various jobs during her working years, including as a caregiver at a PCH, a bank teller at CIBC, and bookkeeper at the family business (Matheson Lumber).  But she was most proud to have run her own store called Souris Crescent Novelty and Gifts, which included the local Sears and Perth outlets.

Marg spent many an hour with her best friend, Edna Swaenepoel, who lived right next door for many years; often playing cards or scrabble and most likely gossiping about fellow townsfolk.  She was a devout supporter of the Queen of England and the Royal Family and Edna, being a war bride, convinced her to take a trip to England in 1980 with her.  This was Marg’s only overseas trip and she talked of it often and always wanted to go back (but never did).  She often told of how she was shocked when the hotel desk clerk asked what time she wanted to be knocked up in the morning.  Edna had to explain that this was the English equivalent of a wake-up call, not the proposition Marg was afraid was being made.

Marg never held a driver’s licence, or even tried to get one, and the one and only time we let her get behind the wheel was enough to prove she would only ever hold the position of backseat driver (and an opinionated one at that).   But she was never shy about asking Norm, her children or grandchildren to be her chauffeur and it never stopped her from missing a Christmas concert, sporting event or family gathering.

She also never missed a Royal Purple meeting or gathering with her dearest friends Norma Dodd, Marie Peasley, Faye Long and Gail Eisler.  She was very proud of her perfect attendance record over five decades.  She was a long-standing treasurer (amongst many other roles) with the Royal Purple and also audited books for various community groups and organizations.  The old-school bank teller in her never went away.  All books, whether it be her own cheque book or a community group’s books had to balance to the penny.  The modern bookkeeping principle of “close enough” never took hold in her.  Neither did online banking – “Why would anyone put their banking information on a computer for someone else to see?!” she would always argue.

Marg spent countless hours at “her spot” at the kitchen table, with a cup of coffee and cigarette beside her.  She loved playing card games at family gatherings, board games with the grandchildren or crossword puzzles and solitaire on her own.  Although very patient with the young ones, she did NOT like to lose to adults.  This didn’t seem to happen very often though…funny to the rest of us since she was always the scorekeeper, just a sheer coincidence to her.  She was never without a wisecrack and a laugh, and in fact, she frequently gave out the middle finger when she had lost a round or someone disagreed with her opinion (which was of course the right opinion).  That is, until someone informed her of the true meaning, and she was absolutely appalled – although she continued to dole it out as necessary.

Despite her lack of outdoorsy-ness, she and Norman enjoyed camping in the trailer and then upgraded to a lakeside cabin at Oak Lake Beach. She enjoyed watching the grandkids play in the water and fish off the dock (despite any ability to swim and a complete reluctance to ever wear a bathing suit), hosting family, and having a drink with other Souris friends at the lake.

Marg and Norman were creatures of habit; they ran a tight ship and had their set schedules, which usually centred around a good meal.  She cooked a big lunch every day at 12:00 sharp for Grandpa and which ever child or grandchild was stopping in for lunch that day (there was usually at least one extra).  The afternoons were for resting on the couch watching soap operas before one of the grandchildren showed up after school to visit, grab a snack or get ready for a sporting/school/social outing (Grandma’s house was the go-to spot in town since all of us grandchildren lived on farms outside of town).   And of course, all family events centred around the meal.  Large formal meals with everyone crowded around one table was mandatory and whenever someone claimed to be full, she would say, “just lean back and rest and then you’ll be able to eat more”.  And oh the rules in their house! You had better shut the damn door so as not to let a bug or warm air in, “what, were you born in barn?!”; you MUST shut the curtains during the day; you COULD NOT take food into the living room or keep your shoes on in the house; and why a person would ever leave the lights on when they left a room, was beyond her. For years, her signature fashion choice was a muumuu and a pair of flip flops (that we pleaded with her not to call thongs) and of course a nice skirt/dress topped off with a babushka if she was going outside. It took over 75 years to convince this woman to wear a pair of pants. Why fix what’s not broken.

Norm passed away in 2009, and after her own health began to fail Marg (reluctantly) moved to Brandon; first to Victoria Landing in 2015, and eventually to Freeman Estates where she lived until she peacefully passed away in the early hours of May 17, 2021.

As we sat around to write this tribute, we couldn’t help but laugh at her wit and wisdom, her stubbornness and nosiness.  But we did so with great love and affection.  She was “MARGARET!” when Norm needed her; Auntie Marg when family visited.   She was our Mom, our Grandma Nana, our Grams, our GiGi.    She was the provider of backrubs, the first call on our birthdays, the hugger who was never too old for another.  She will forever remain in our hearts and thoughts….especially when we each have our “baby Margaret” moments.

Due to the Covid-19 restrictions, a private graveside service was held with immediate family. In lieu of flowers, donations may be made to the Souris Elks, the Souris Legion, or the Children’s Rehabilitation Centre.