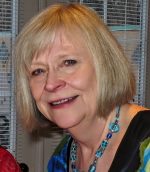 It is with heavy hearts and deep sadness we announce the passing of Joan on Monday, January 25, 2021 in St Paul’s Hospital, Vancouver, B.C.

Joan arrived in Souris, Manitoba on February 23, 1949, and was the second of three children born to Muriel and Gordon McCulloch. Growing up in the close knit community of Souris allowed the always-social Joan to join every club available, which resulted in lasting friendships that remained true throughout her life.

From 1967 to 1969 Joan attended the U of M where she majored in playing bridge (that was her favourite joke). After realizing her talents lay elsewhere, Joan enrolled in the Misericordia General Hospital School of Nursing. After graduating, Joan worked as a nurse in Edmonton, Kamloops, and Winnipeg, before settling permanently in Vancouver in 1988. She spent the majority of her nursing years working at the UBC Hospital in the geriatric ward, and was a tireless advocate for the nurses’ union, eventually serving as their shop steward for three years.

Vancouver was a great fit for Joan, who loved the bustle of a big city and a thriving arts and culture scene. It also kept her close to family, as her brother Alex and his wife Valerie had also settled there. In all the years Joan lived in Vancouver, she never tired of calling her friends and family back home each February to inquire how the prairie winter was going, while informing them that the flowers were starting to bloom in B.C.

Dinner parties were her favourite. You could always count on Joan to turn cooking a meal into an event of its own, complete with a beautifully decorated table. In fact, Joan was the go-to designer and decorator for many holidays and celebrations, often taking the lead on making each space she was given elegant and comfortable. Later in life she splurged on a kitchen remodel, and she loved the results so much her guests were regularly greeted with an enthusiastic, “Welcome to the best kitchen in the world!”

While Joan did not have any children of her own, she was very close to her nieces Christie and Alexandra, and nephew Michael. She enjoyed special activities with each, including introducing Christie to the wonderful combination of going out for pizza then seeing a ballet, taking Mike to the movies his parents didn’t approve of, and treating Alexandra to White Spot burgers or Bella pizza paired with a movie or show.

Joan was fiercely independent, but always held her heart open for her dear old friends in Manitoba, the new friends she made in Vancouver, her condo neighbours in her building in Kitsilano, the patients she cared for at the hospital, and most of all, her family who will miss her dearly.

Joan is predeceased by her mother and father, Muriel and Gordon McCulloch, and her brother Dennis McCulloch of Winnipeg. Left to mourn her passing is her brother Alex, sisters-in-law Valerie and Barbara, nieces Christie and Alexandra, nephew Michael, and countless friends too numerous to name.

A celebration of Joan’s life was held at the Souris & Glenwood Cemetery on Saturday, August 14, 2021. If you would like to honour Joan, please make a donation to the Winnipeg or Vancouver Folk Festivals, or the Hospital Foundation of your choice.