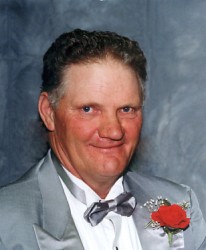 MCDONALD – John Alexander McDonald was born in the RM of Pipestone on December 12, 1943 to Walker and Mary McDonald. John and his one brother Dawson attended Pipestone School. At the young age of 11-years-old, John’s Dad passed away. John and his Mom moved to BC in 1957 only to return to Pipestone 2 years later, one of John’s memories was attending Reston High School the 1st year it was built. John’s employment began at the Reston Creamery first inside then as a cream and milk truck driver. Later he worked for Grey’s Transfer and worked on his cattle and grain farm. John loved his community and loved visiting with friends and neighbours. He went for his breakfast and lunch almost every day to the Sandy Land Drive In, once found outside Pipestone on the Junction of Highways #2 and #83. It was there he first laid eyes on a new cook and waitress from Hartney. Less  than a year later they were planning their wedding. John married Mary Ann Alston on October 16, 1993 at the age of almost 50-years-old John not only became a husband for the first time but also a step-father to 3 daughters, acquired 1 step-son and had a grandbaby on the way. John took everything in stride, as he did his entire life and immediately became a treasured part of the family. John and Mary Ann remained in Pipestone until they bought a house and moved to Hartney in 2005 to be closer to medical care and family. Even through illness John attended as many auction sales as he could for as long as he could. These sales were important to him to connect with friends and have a lunch as well as to get the numerous “deals” he could just never pass up. We will always remember John as a kind and gentle man. His grandchildren say they will always remember he liked to tease them about anything. One of his granddaughters stated at his funeral service “I wish there was visiting hours in heaven.” John passed away May 4, 2014 in Souris, MB. A service of praise and thanksgiving for his life was held on May 9, 2014 in the Pipestone Hall and interment in the Pipestone Cemetery. Rev. M. Dwight Rutherford officiated. John is loving remembered by his wife Mary Ann, step-daughters and their spouses Vickie and Murray Thomas, Brenda and Tim Newman and Bev Leverington; grandchildren Kendell, Kristen, Kortney Thomas, Samantha, Ryan Newman, Brittany, Bryceson Levrington; sisters-in-law Carol McDonald and Marie McDonald; nieces Debbie Driedger and Liz McDonald and their families.