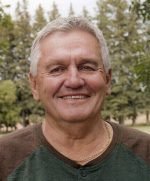 O’Greysik: Joseph Richard of Souris, Manitoba. Passed away at the Souris Health Centre on July 20, 2018.

Joe was employed by Manitoba Hydro for 38 years and retired as District Operator for the Souris area. He spent his first 7 years working in northern Manitoba in the early 1960s where many dam projects were taking place. In 1967 he accepted the position of District Assistant in Souris, working with Len Haskett. When Len retired, Joe became District Operator.

Joe was enthusiastic about participating in and viewing many sports. He began playing hockey at the age of 5 years, continues with Jr. Hockey in Moosomin, Saskatchewan and various Senior Hockey clubs until the age of 68. Joe was an avid golfer for 50 plus years and participated in many Legion tournaments and International tournaments in Minot, North Dakota. As a long standing member of MAAC, he built and flew remote control planes and enthusiastically attended air shows with his family.

Joe loved to spend time watching his granddaughters in their various activities: ringette, basketball, softball, swimming and archery. He was so proud of his family and of being part of the community of Souris.

Joe was a Royal Canadian Legion member, a member of the gun club and a busy volunteer at the golf course. For a number of years he coached minor hockey and baseball teams. Joe was a member of the Souris Fire Department for 32 years and his family was deeply touched by the Department’s honor guard preceding the funeral.

Joe was a strong, loving presence to his family members, friends and co-workers. He will be sadly missed by all, as was demonstrated by the number of friends and family who attended his reception at the Souris Golf Clubhouse.