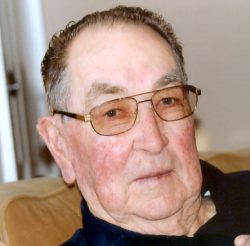 Lyle passed away peacefully in Souris Health Center at the age of 84 years. He will be dearly missed by his wife Dolly, his brother Gordon, daughter Susan (Greg), son Scott (Cathy), and grandchildren Cailin (Jordan) and Steven (Brittany). He is also survived by many nieces, nephews and friends. Lyle grew up on the family farm in the Rural Municipality of Glenwood where he attended Wolflea & Hunnington Schools. He joined the twelve Manitoba Dragoons (Reserves) in 1944 and served with the regiment until 1958 when it was disbanded. Lyle graduated Souris Collegiate in 1948. From 1949-1950, Lyle spent 6 months with the Royal Canadian Armoured Corps at Camp Borden and a further 6 weeks in April 1950 with the Canadian Army in Manitoba. He was then called out in June 1951 for a one month duty with the active force at Wainwright, Alberta. In 1956 he was awarded the Fifth Service Chevron with Maple Leaf. From 1951-1957 he worked with the CPR as a brake man in Souris, Minnedosa & Winnipeg. He graduated from the Manitoba Technical Institute in 1958 as a Public Health Inspector, and worked for the Department of Health in Brandon from 1959-1970 and was later transferred to the Department of Agriculture Dairy Branch where he retired in 1989. During his retired years, Lyle enjoyed farming, gardening and his family. Lyle was a lifetime member of the Souris Legion Branch #60.  A graveside service was held on Wednesday July 10, 2013 at 11:00 am at the Souris and Glenwood Cemetery. In memory of Lyle, donations may be made to the Souris CPR Museum        c/o Town of Souris Box 518 Souris, MB R0K 2C0 or to a  charity of choice.