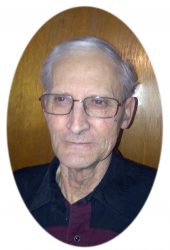 Alfred of Souris, Manitoba passed away on November 28, 2015. He was born August 27, 1937 in Antler, Saskatchewan to Julian and Marie Revet. He was the second of sixteen children. Alfred grew up on his parent’s farm in the Antler-Bellegard District where he attended school. At age seventeen he left the family farm to go work as a farm hand on a neighbouring farm. Then at age twenty-one he got a job clearing trees in Southwest Manitoba. It was then he met the love of his life, Agnes Martine and they got married in Grand Clairiere on May 21, 1960.

Alfred joined Royal Paving later that year, working his way up to foreman. He remained with them for twelve years after which time he bought a farm in Grand Clairiere in 1970. He and Agnes had six children when the oldest one, Claudette passed away in 1963, they were left with five children.

In 2013 Alfred and Agnes retired form farming and moved to Souris. After living there for two years, Alfred became ill. He passed away at the Souris District Hospital.

His family thanks their family and friends for all the sympathy cards and food that has been sent; the Souris hospital staff and Dr. Cram for their care and the Catholic Women’s Association of Grand Clairiere. Thanks to Father Eric for the service and to the choir of Grand Clairiere.