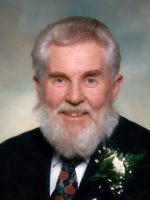 Lorne attended school in Deleau, until grade 11. From there he went to Winnipeg to attend University of Manitoba, graduating with a Bachelor of Science in Agriculture in 1952.

Lorne returned to continue farming with his family. He especially enjoyed the Hereford cattle business.

Lorne had many interests he enjoyed:  cattle, music, photography, travel, gardening, and the Co-operative system.

Lorne sat on the Hartney Co-operative board for 51 years. He also sat on the Federated Co-op Board out of Saskatoon for 20 years from 1979 to 1999.

His work with FCL took him across North America and as far away as Japan.

Lorne collected cups from around the world which he proudly displayed in his home.

Jani and Dale McBurney took over the management of the farm in 1988 and moved onto the farm in 1989.  At that time Lorne built a new home on the farm, which he enjoyed immensely until his passing.

Lorne made many great friends through his travel and activities!

He would be very proud to have everyone remember him in their own way!

Funeral service was held at the Hartney United Church on Wednesday, July 4, 2018. Private interment in the Riverside Cemetery, Hartney, Manitoba. In memory of Lorne, donations may be made to the Manitoba Lung Association or to the Heart & Stroke Foundation.