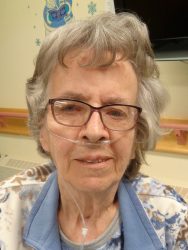 STEWART: Jessie  Elizabeth Stewart. Jessie Elizabeth Henderson was born on September 27, 1930. Jessie was the second child of Alex and Mabel (Fuller) Henderson of Oak lake Beach, Manitoba. She had one older sister, Margaret, and five younger siblings; Dorothy, Alice, Phyllis, Bill and John. Jessie and her siblings worked hard on the family farm feeding and watering pigs and chickens; stooking sheaves and threshing grain; milking cows; trapping muskrats and cutting down oak trees which were made into fence posts. Jessie attended Sandhurst and Landsdown schools. Usually, Jessie and her sisters would not start school until late fall as they would be at home helping with the fall work until then. Jessie’s only claim to wrong doing was climbing up the windmill at home one day her Dad was away. Jessie had made up her mind to climb up and sit on the platform beneath the windmill. Feeling very proud of herself while sitting on the top of the windmill, the wind started to gust and she could not find the steps to get herself back on the ground. Her sisters told her they

would catch her if she fell. After about an hour had lapsed, one of them had to finally climb up and get her foot on the ladder to guide Jessie back to the ground safely. Jessie’s Dad never found out about the event which had taken place. One day, Jessie came home from school after some of her classmates had painted her fingernails red. Jessie often commented, “They would do that, you know. Paint their fingers at

school!” Jessie, shy and concerned that her Dad would have something to say about the red nails, hid them from her father at the supper table that very night so that he would not notice. Jessie was convinced that her Dad did, in fact, know but decided it best not to say a word! When Jessie was asked what her favourite color was, she would quickly comment, “Well, blue, of course!” Upon completion of Grade 9, Jessie found herself working at the Wawanesa Insurance in Brandon for nine years. On weekends, she would come back to Oak Lake Beach to help run the booth with her family. In fact, one weekend, Jessie helped shingle the family barn! Jessie met and fell in love with a farmer from Pipestone, Manitoba. Jessie and the love of her life, Charlie Stewart, were married on December 5, 1959. Jessie and Charlie had three boys named Bill, Tom, and Brian. Jessie was a hard worker and found joy in planting large gardens, baking, cooking, canning,  milking cows, and looking after her three sons. She loved to see things growing in the garden and tending to her flowers. Jessie could throw a good meal together in about twenty minutes for her family and would sing songs while she worked. One thing Jessie disliked was hauling grain at night with the grain truck. Charlie would guide and point her in the direction of the gate. Once she would near a bluff or slough and had to find her way around, she would end up heading in another direction and would be lost in the field! Charlie would laugh as he saw her drive around the field. On September 23, 2011, Charlie and Jessie’s eldest son, Bill, passed away suddenly. Bill was only 50 years of age. His sudden passing was very difficult for the family. Charlie, Jessie, Tom and Brian continued farming together up until this past summer when Charlie and Jessie both moved off the family farm after 56 years. Jessie took sick on August 27, 2015 and spent a month in Brandon General’s ICU. Jessie was eventually moved from the ICU onto a medical ward at Brandon General. Five doctors advised the family that Jessie would not survive without the assistance of a ventilator. Jessie steadily improved and got back on her feet with only the requirement of oxygen being administered via nasal prongs. She was moved to the Souris Hospital and eventually into the Souris Personal Care Home. While in hospital, Jessie loved to get her hair washed and curled weekly by her friends, Dale VanLoo and Grace Ross. She even got her nails polished, too! Mom really enjoyed the visits and shared stories from the past with them. Jessie was predeceased by her son, Bill; her older sister, Margaret Orr of Elkhorn; and her youngest brother, John Henderson of Oak Lake. She leaves to mourn her husband, Charlie; her sons, Tom (friend Grace), and Brian of Pipestone; daughter-in-law, Sally Stewart and grandson, Alex of Rivers; sisters, Dorothy Bussey of Brandon; Alice (Jack) Olive of Oak Lake; Phyllis (Murray) Kennedy of Calgary; brother, Bill Henderson of Oak Lake; and sister-in- law, Elaine Snelling of Brandon; nephew, John Orr of Elkhorn and numerous nieces, nephews, and cousins. A Graveside Service was held on Saturday, April 30, 2016 at the Pipestone Cemetery. In memory of Jessie, donations may be to a charity of your choice.