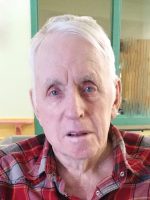 Stewart: Charlie was born on December 12, 1929 in Virden, Manitoba to parents William R. B. Stewart and Sarah (Ashley) Stewart.  Bob Stewart was Charlie’s older brother.  The family grew up in the Rural Municipality of Pipestone.

Growing up in the dirty 30’s, the family had it tough.  Charlie and Bob would run around in their bare feet.  Charlie would often comment that thistles would never hurt the soles of their feet as the soles were like shoe leather!

Charlie and Bob went to Lambton School which was about a three mile walk across the fields or sometimes, they would ride a horse.  In the winter months, Charlie and Bob would start the fire to have the school warmed up ahead of time before the school day started.  In his early teens, Charlie and his brother would work for their Uncles, Joe and Charlie Ashley, out in the fields threshing, cutting trees for fence posts, and digging holes just to name a few of their designated tasks.  Charlie would tell the story how his sledge hammer to drive the posts, was a big piston filled with cement on a stick which he could barely lift.  During this time, Charlie also worked for other neighbors and helped carpenters shingle and build houses.  Charlie enjoyed playing baseball, going to dances, and hanging out with his friends.

In 1953, Charlie went to Fort Francis, Ontario to a bush camp where his friend and neighbor, Bill Jacques, also worked.  Charlie loved it there!  He would describe how the air was so fresh cutting jack pine trees in cord lengths and using his horse, Jerry, to pull the cut trees.  One time, Charlie had a log that he had stood up on end and was about to carry this large, heavy log when he slipped.  Bill Jacques was beside him.  Charlie yelled out, “Look out Bill!” as the log hit the mud.  Bill got splashed with mud.  The mud completely covered Bill and a few seconds later, with his white teeth showing, all he could do was laugh.  Charlie worked at the camp for two winters and was asked by his parents to return to the farm.  By this time, Charlie had met a really nice, hard working girl, Jessie Henderson from Oak Lake so the decision was not a difficult one to return to the farm.

On December 5, 1959, Charlie and Jessie were married and the next thing you knew, three boys were born: Bill, Tom, and Brian.  Charlie and Jessie milked cows, shipped cream, raised cattle, and grew some grain.  Mother, Jessie, had a big garden and worked very hard on the farm.  Dad’s two favorite machines were his Farmhand loader and stack mover which made putting up the stacks of hay and straw a lot easier.  He would often help move stacks for his neighbors with his favorite toy.

Charlie and Jessie always had names for their cattle which seemed to get more bizarre as the herd grew in numbers.  One morning, as they were finishing up milking the cows, their neighbor, Bert, opened the barn door and a “soon to calve” heifer jumped over the panel into the back of the barn from the front when she heard Bert’s voice.  Hence, this heifer now became known as “Cow Afraid of Bert”!  Charlie’s boys advised Charlie that they would have to start using ear tags and numbers as the cows names were getting longer.  Charlie and Jessie hesitated with this new technology but went along with it going forward.

Charlie always liked to attend the cattle sales and see his cattle sell.  One time, Tom was with Charlie and they were a little late getting to the Virden Auction Mart to see their cattle sell.  As they walked in, auctioneer, Ken Wilkinson, said, “I hope you brought your big truck!”  Tom noticed Dad had a concerned look on his face for a few seconds.  Ken then added, “Sold already!  You are ‘gonna’ need it to carry your cheque home, Charlie!”

Dick and Nel Van Buuren were very good friends of Charlie and Jessie.  Dick would phone Charlie on a regular basis, sometimes every night, to see how the haying and calving was going and what was happening in the area in general.  Before the cattle trailer era, Charlie and his three ton truck would help to deliver some of Dick’s cattle to market. Charlie and Dick frequently enjoyed ice fishing on the lake at Oak Lake.

Charlie loved to watch wrestling on the TV and would often point out that the bad guy was usually cheating during the match or inform onlookers how bad the ref was performing at his job.  In fact, Charlie’s love for wrestling found himself and some of his neighbors watching “Hulk Hogan” wrestle at the Keystone Centre in Brandon! The boys and Charlie enjoyed spending time at bull and cattle sales whenever there was a need to purchase some more stock.  During calving time, Charlie opted for the early 6:00 a.m. shift to mind the cows while calving which provided a break for both Tom and Brian to get some much needed sleep during the very busy and cold calving period.  Charlie and Jessie would go to the local dances, fiddling contests, and generally, they just liked to spend time together and visiting with friends.

Charlie and Jessie found themselves on an Alaskan bus tour in 1998 but really enjoyed driving the back roads closer to home instead.  In fact, the back road drives became known as “taking a drive around the block” to the family!

Tragedy struck as their eldest son, Bill, passed away at the age of 50 years on September 23, 2011 leaving behind a son, Alex, and his wife, Sally.

Funeral service was held at the Pipestone Community Hall, Pipestone, Manitoba on Friday January 19, 2018 at 2:00 p.m. Interment in the Pipestone Cemetery. In memory of Charlie, donations may be made to a charity of your choice.