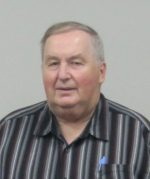 Bill (William) Tanguay passed away on March 17, 2022 in Souris after a brief illness. Bill is survived by his loving wife Betty (Elizabeth), two children Jennifer (Lee) and Chris, his brother Dennis (Cheryl), his sisters Mary Ann and Pat (George), his sisters-in-law Val and Donna, as well as many nieces and nephews.

Bill lived his entire life in Souris. He and his brother Dennis ran a successful business in town for over 40 years before retiring. Bill was an active member of the Souris community. He volunteered wherever and whenever needed. His community involvement started with coaching when he was in his 20s and expanded into town improvements through his work in the park and cemetery with the forestry committee. He served as a councilman for 12 years and was still in office at the time of his passing.

Bill will be remembered fondly by friends and acquaintances. He will be missed and leaves a hole behind in those who loved him.

In keeping with Bill’s wishes a private service was held. A public tree planting ceremony to celebrate Bill’s life will be held in the Souris Park at a later date. Notifications will be posted prior to the service. In memory of Bill, donations may be made to the Souris –Glenwood Forestry Program (for the purchase of new trees) c/o Municipality of Souris-Glenwood Box 518 Souris, Manitoba R0K 2C0.