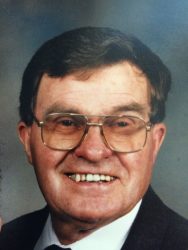 Jack was born April 17, 1924, the seventh of ten children born to James and Violet (Moore) Tufts of Fairfax, MB.

He was predeceased by his parents Jim and Violet Tufts, and by three brothers Wilfred, Lawrence, and Mervin Tufts, and a sister, Margery Post. Also a son James Arnold Tufts, and a grandson Daniel Robert Tufts, and a nephew Brian Chambers.

Left to cherish Jack’s memory are his wife Margaret (Latimer) Tufts, his son Stephen and Stephen’s wife Lisa, his daughter Phyllis Armstrong and her husband Dick Armstrong, and his daughter-in-law Valerie Tufts.

Jack loved farming, restoring antique cars and machinery and fixing anything that needed fixing until his hands wouldn’t work anymore.

We also Square Danced for 33 years, he loved travelling and having coffee with the “boys” and visiting.

Jack had his last ride in his Model “T” car with Stephen to the graveside service at the Elgin Cemetery on Saturday, October 22. Jeff Tufts, a grandson, urn bearer.

The memorial service was held on Sunday, October 23 at the St. Paul’s United Church in Souris with the Rev. Wendy Rankin officiating.

Donations in memory of Jack may be made to St. Paul’s United Church, Souris Palliative Care or the Souris Personal Care Home.