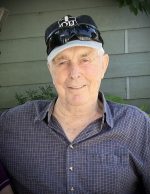 Vandermeulen: It is with great sadness that we announce the passing of George Vandermeulen on 05 Aug 2021 in Souris, MB. He was the second of seven children born to Germain and Zulma in Boissevain, MB on 30 Sep 1929. George was a loving husband, father, grandfather, great grandfather, brother, uncle & friend.

George worked for the CPR as both fireman and engineer – dating all the way back to the steam locomotives! When work was slow on the railroad, he worked for Dodd’s Plumbing & Heating, Tanguay’s Hardware and Mutual Life Insurance of Canada as well as helping farmer friends.

In his younger years, George enjoyed playing baseball, fastball, curling & hunting. He was always up for cards & games with friends and family. He took great pride in finding ways to fix almost anything around the house & yard with the greatest of ingenuity.

George enjoyed 30+ years of retirement and very much enjoyed watching all sports on television and continuing his “fix-it” tendencies. He took pride in tending his apple trees and loved to have coffee beneath them on the patio with friends & family.

There was a Memorial Reception at St Paul’s United Church in Souris, MB on Thursday, 12 August 2021 . A private interment will take place in Boissevain Cemetery.

Our family would like to extend our sincere gratitude to Doctors Sequiera, Cram & Beaupre and the Souris hospital nurses & staff who were so incredibly caring & compassionate during his time in their care.

In memory of George, you may wish to donate to Souris Hospital Palliative Care c/o Prairie Mountain Health, Box 10, Souris, MB R0K 2C0 or a charity of your choice.