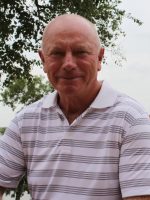 Affleck: Dennis, 75 years, beloved husband of Christine Affleck, father of Jeff and Tom, passed away in the Souris Health Centre on Saturday, October 15, 2022.

Dennis was born and raised in Charlottetown, PEI, to Walter and Georgina Affleck. Dennis loved growing up on the island with his two brothers (Les and Brian) and sister (Anne), while keeping busy fishing, playing baseball, football and especially hockey. Dennis excelled at the game of hockey and received an athletic scholarship to Saint Dunstan’s University. Following university, Dennis had the opportunity to play hockey professionally, but decided to follow his heart and join the Royal Canadian Mounted Police. After graduation from depot in Regina, Dennis was first stationed in Gillam, Manitoba which he truly loved. In 1971, Dennis received the Medal of Bravery for saving a life and de-escalating a serious situation. During his Gillam years, Dennis developed a real passion for the outdoors, specifically hunting and fishing. Dennis was later transferred to Winnipeg, where he worked several years in the drug section with some of his best friends. In June of 1976, he met and married wife Christine after meeting each other through mutual friends. Not so soon after, they were transferred to The Pas and welcomed their first child Jeff in 1981. A year later they would settle in Brandon, where they welcomed their second child Tom in 1983. Dennis was a very active father for the boys, as he was always willing to coach their sports, build them an outdoor rink, or take them on some entertaining family trips. For his final stop with the RCMP, Dennis was transferred to Souris, Manitoba where he became Sergeant for the area. Dennis quickly fell in love with the small town. He formed lifelong friendships through spending time at the golf course, rink, ball diamonds and of course “The Lodge.” As years past, the love for his community grew; he would drop anything to help someone out, regardless of who needed the hand. He initially retired in 2005 from the RCMP as a Sergeant after 35 years in the Force. After a brief four-month holiday from the beat, he returned to the RCMP and served as a Constable for 7 more years in the surrounding communities before retiring for the second time in 2013.

His favorite past times included travelling with his wife Christine to Mexico during the winter months, cutting wood at the lodge, golfing, and “happy hours” with friends and family. His Grandkids were his pride and joy. Whether it was watching his granddaughters play hockey or teaching his grandson how to run the bases at the ball diamond, he was always there for them. He wore the title of Grandpa proudly. He loved his family with all his heart, he loved his friends like they were family, he loved his community like he’d never left, and as we grieve his passing, we find comfort in knowing how much we all loved Denny.