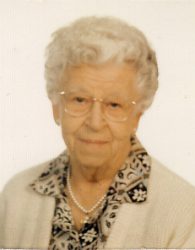 Agnew: Joyce Gertrude passed away peacefully with family by her side at the Hartney Community Health Centre on Thursday, November 5, 2015 at the age of 94 years. She leaves to cherish her daughter Donna Lynn (Celest), son Neil (Joyce), son Tom (Jane) and daughter Barb (Jack); grandchildren Kim (Chris), Brad (Crystal), Tresa (Greg), Lindsay (Scott), Craig (Diana), Shalea (Aaron), Tammy (Tom), Greg (Crysti) and 18 great grandchildren. Joyce was predeceased by her husband Wes, son Roy, infant daughter Wendy and sister Doreen. Joyce was born in Yorkshire, England on August 3, 1921. Her mother Agnes (McDermott) Howard passed away at the age of 29. In 1927 their father, Harold, brought Joyce and her younger sister, Doreen, to Canada aboard the SS Minnedosa. They traveled to Landbank, Saskatchewan to live with his sister, Lily Marriott. While they were living with Mel and Lily Docking (Marriott) Bill was born becoming a little brother to the girls and remaining best friends throughout their lifetime. The girls were adopted by John and Mary Burrill, good friends of the Marriott’s, after their father returned to England. Wes and Joyce met in Davidson, Saskatchewan, and were married on December 26, 1944. As well as raising her family of five, Joyce was a foster mother to foster babies for a number of years. She enjoyed knitting, sewing and crafts. After 33 years of farming, Joyce and Wes moved to Brandon in 1982 and became founding members of the Commonwealth Air Training Plane Museum. Joyce spent hours knitting on the road as Wes searched for airplane parts for his collection throughout western Canada. She very much enjoyed her grandchildren’s visits while living at Lion’s Manor. A private family service was held at Kowalchuk’s Funeral Chapel in Souris and burial at Rosewood Memorial Gardens in Brandon with Arlene Robertson officiating. Donations in memory of Joyce may be made to the Hartney Community Health Centre, Box 280, Hartney, Manitoba R0M 0X0. A very special thank-you to Dr. Cram and the nurses and staff at the Hartney and Souris Community Health Centres for the wonderful care Joyce received during her time there. Thank-you to Kowalchuk’s Funeral Home in Souris, for their compassionate care and assistance.