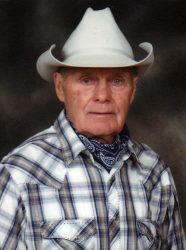 Winters: With his family by his side, Lowell Raymond Winters passed away on October 29, 2015 at his home on the family farm in the R.M. of Sifton. Lowell was born on December 14, 1932 at St. Boniface Hospital in Winnipeg, MB to John and Helena Winters of Sanford, MB.

Lowell grew up on the family farm in Sanford, MB where he attended school until the age of 15 when he left to take over the farm following the death of his father in 1948. He took over the responsibilities of being the head of the household after his father’s passing as there were five younger siblings to provide for.

In 1951, Lowell met his life-long love, Eileen Curdt, at the Carmen Fair while playing baseball. When he played hockey in Sperling that winter, the two began their relationship that led to marriage on October 30, 1954.

Lowell grew up a grain farmer but his heart lay in raising cattle and horses. Lowell and his brother went in search of the perfect place to start their new farming venture and ended up settling on Oak Lake. Lowell’s brother and his wife made the move first and Lowell and Eileen followed them in 1962. They all shared a yard while Lowell and Eileen waited for possession of their new family home. After moving to their new farm, they welcomed their final son to the family.

Lowell and Eileen raised their 6 children on the farm south of Oak Lake. Lowell was often found coaching behind the hockey bench in town or working as a trustee of Lansdowne School.

Over the next 50 years, Lowell and Eileen shared the passion of building up their home and farm with the help of their children. What started as a humble cattle operation of 15 head grew into a reputable herd of Angus cattle. Lowell was one of the last of the true cowboys. Cattle were meant to be worked on the back of a horse and there was no other way to do it for Lowell. Lowell was active on the farm up until the last week of his life, fixing fence and working with the animals.

Lowell was an active member of his church and his community. He lent his voice to the church choir almost every Sunday and could always be counted on to lend a hand. He was a long-time member of Oak Lake Ag Society and will be remembered for his pit BBQ beef for many community events and celebrations.

A funeral service was held on November 3, 2015 at Oak Lake Community Hall with Don Sellsted officiating. Urn bearer was Tyler Winters with internment at the Oak Lake Cemetery. In memory of Lowell, donations may be made to a charity of your choice.