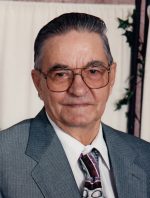 Atchison: It is with great sadness that the family of Edward (Ted) Norman Atchison announces his passing on April 22, 2020. Ted was born April 6, 1926 to the late Price and Georgie Atchison. He married the love of his life Lillian Kruger on June 20, 1951. Ted’s greatest passion was his family. Ted made his living farming and enjoyed the farm life and country living. Ted is survived by his wife Lil, his sons Tim (Sheila), Les (Jackie), Larry (Caroline) and daughter Tina (Pat). He is also survived by his Brothers Doug (Sheila), Don and sisters Myrna, Elizabeth (Allan). He was also survived by 10 grandchildren, 12 great-grandchildren and numerous nephews and nieces. He was predeceased by his parents and his sisters Mary and Joyce and his grandson Terrence. A celebration of life will be held at a later date. In memory of Ted, donations may be made to the Heart and Stroke Foundation of Manitoba or the Souris Hospital Palliative Care Fund c/o Prairie Mountain Health Box 10 Souris, Manitoba R0K 2C0.