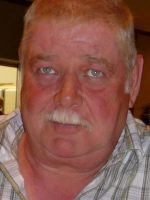 It is with heavy hearts we announce that on Tuesday April 28, 2020, Harry Arthur Linstead, aged 69, passed away peacefully at Prairie Mountain Health in Brandon Manitoba.

Harry was born in Brandon Manitoba to Lenora (nee Addison) and Arthur Linstead in 1950. He is survived by his four sons, Perry (Darlene), David (Sheri), Darcy, Casey and his daughter Fay (Doug) Cassidy, and was blessed with eight granddaughters Bryna, Heida, Lindis, Skyla, Tiana, Leighton, Kenzie and Chayla. He is survived by brothers Barry (Carol) Williams in Utah and Joe (Cecilia) Linstead in Calgary and predeceased by sister Ruth (John) Siemens (nee Williams)

Harry was a charismatic, charming and talented individual who could tinker and fuss with all things mechanical and make it work again. He loved his Ford 8N, as much as he loved to have a friend pull up at the farmstead for a visit. Harry was a talented musician and spent most of his life entertaining others. He was generous and kind and had the best of manners which he insisted his children adhere to at all times. He loved music, his dogs and his love: Jackie Linstead whom he lost in September 2018.

A memorial service will be held at a later date and further details will be released as social distancing measures are relaxed. In lieu of flowers, please send donations to CancerCare Manitoba.