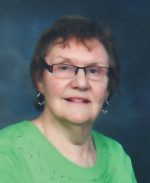 Brandon: Isabel Ruth. April 12, 1944 – April 29, 2018. Daughter of the late Forrest and Doris (Reid) Brandon. She attended Souris School, graduating in 1963. Ruth went on to Winnipeg to school of Nursing, graduating in 1966. The north called and she was hired in Norway House where she worked for Indian Affairs. She returned to Winnipeg but soon moved to Vancouver and was employed by the Vancouver Police Department as a nurse for 30 years. Ruth returned to Souris upon retirement in 2000. She became a busy community minded lady with being involved with St. Paul’s United Church and choir, Souris & Glenwood Foundation, Victoria Park Lodge Board, Christmas Cheer Board, Souris Art Club member, Souris Arts Council and helped start the Souris Food Bank. She loved animals especially her 3 cats, they were like children to her. She will be remembered by a strong sisterhood of friends, brother Robert (Ester), Hillary and Will. Ruth moved to the Souris Personal Care Home in 2013 and made many friends with everyone. She never lost her smile and was always a kind person to the staff and residents. A funeral service was held at St. Paul’s United Church on Tuesday, May 8, 2018 with interment in the Souris & Glenwood Cemetery. In memory of Ruth donations may be made to the Alzheimer Society.