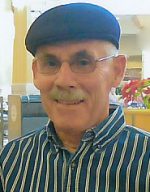 Carlisle: William Donald Carlisle, March 13, 1941 – August 3, 2018. It is with heavy hearts and deep sadness that we announce the peaceful passing of Don Carlisle at the Brandon Regional Health Centre at 77 years of age. Left to mourn his passing is his beloved partner Carole Barclay; son Steven Carlisle (Lynda) and grandson Rylan; sister Adele Nicholls; brother Jerry Carlisle (Evelyn) and numerous cousins, nieces and nephews. His extended family includes David McBurney (Carol); Diane McBurney-McKinnon (Jim); Sandy Barclay; Justin Rowe (Ashton); Warren Barclay (Renee). He is pre-deceased by his parents Ethel and Ivan Carlisle. Don was born and raised in Souris. MB. As a young man Don worked at Wilton Motors in Brandon, MB. He spent some time as a house painter before starting his career with Canadian Pacific Railway. In 1972 his son Steven Carlisle was born in Souris, MB. Working as a brakeman and conductor with the CPR, Don lived in both Saskatchewan and Manitoba, eventually settling in Brandon, MB with his partner, Carole. He retired in 1996 after 31 years with the Railway. Following retirement, the cottage at Oak Lake Beach, MB gave him such pleasure and enjoyment. If he wasn’t fishing, riding his motorbike, flying his Hovercraft, visiting with friends or enjoying the surrounding nature he was busy building bird homes or tinkering with his latest “inventions”. Some of these he intentionally devised to give everyone a good chuckle. From an early age, Don was an avid bird lover often taking in and nursing injured birds as they recovered their health. One Cedar Waxwing named Bandit stayed on as a pet for over 20 years! For several years, Don and Carole spent their winters in both Texas and British Columbia. In B.C. Don enjoyed reconnecting with many family members and appreciating the mountains and lakes on Vancouver Island. A quiet and gentle man, Don treasured visits with his family and friends. He loved having a good laugh most often with his cousins. He and his son Steven could spend hours chatting about their mutual love of vehicles, especially about Steven’s restoration of a 1966 GMC truck in memory of Don’s 1963 red and white one. Don will be laid to rest at a private graveside ceremony at the Souris & Glenwood Cemetery at a later date. If friends so desire, donations in Don’s memory can be made to Cancer Care Manitoba or to a charity of one’s choice.