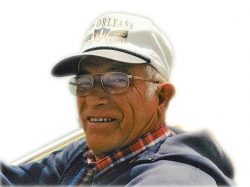 DUFILY – John Ernest Arthur “Jack” Jack was born August 30, 1933 in the RM of Cameron. He was the 6th of 7 children born to Arthur and Nellie Dufily. In 1934, the family moved north to Birch River to escape drought conditions of the prairies. Here they stayed for 12 years. They returned in 1946 to farm south of Oak Lake. In 1953 Jack worked on the original oil pipeline from Glenboro to Winkler. From 1954 – 57 he was a farm labourer in the Souris area. In 1958 he began in the dairy industry where he remained the rest of his working career, until his retirement in 1994. First as a cream truck driver picking up cream at the farms, later as a cream tester, butter maker and ice cream maker for the Souris Creamery. After the Souris creamery burned in 1968, Manco Dairies in Brandon was his employer. The Superior Cheese Plant opened in Souris in 1970 and Jack was hired as head cheese maker, later on becoming manager. In 1960, Jack and Joan Edmunds were married. They were blessed with 3 children Dwayne, Darcy and Brenda. Throughout his life Jack loved the outdoors. Deer hunting was always a special time to get together with the guys. In his earlier years playing softball with the Huntington team provided lots of commardadarie. He was also a member of a bowling league in “Patrick’s Bowling Alley”. Family time meant hockey rinks, camping, boating, water-skiing, ski-dooing, fishing and travelling. The family has wonderful memories of these events with Jack. Jack was a “Jack of all trades” enjoying carpentry, plumbing, electrical work as well as the many aspects of farming. So from remodelling to building, riding a tractor or baling, fixing or doing mechanical jobs he tried them all. Family members have various keepsakes from his wood working shop. Post retirement years allowed Jack and Joan to spend 18 wonderful winters in Arizona. Card games, shuffleboard, casino trips, watching TV (especially sports) became his pastimes. Jack was a member of the Souris Legion and a past member of Souris Game and Fish. Jack passed away on September 10, 2015 at the Souris Health Centre. He is lovingly remembered by his wife Joan of 55 years; son Dwayne (Shahneen), Zamaan and Zayden of Edmonton; daughter Brenda (Cam McGavin), Jill and Alex of Winnipeg; brother Ron (Elaine) of Beausejour; brothers-in-law, sisters-in-law and many nieces and nephews. He was predeceased by his son Darcy; his parents Arthur and Nellie; brothers and sisters and their spouses Mervin (Judy), Joe, Irene (Stan Bates), Sam, Vivian (Reuben Denbow); sisters-in-law Gwyn Setter; brother-in-law Terry Binions. A private family graveside memorial was held on September 19 with Don Sellsted officiating. A celebration of life and lunch followed for family and friends in the Legion Clubroom. The family sincerely appreciates the many acts of kindness and the ways people have reached out to help us through our loss. “Always in our hearts.”

In memory of Jack, donations may be made to the Souris Hospital Palliative Care Fund c/o Prairie Mountain Health Box 10 Souris, Manitoba R0K 2C0 or to a charity of your choice.