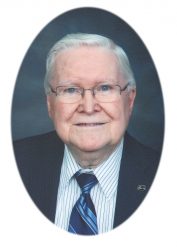 He is survived by his loving wife Ila; his son Clark (Judy) of Bragg Creek, AB and their daughters Cassidy (Steve Matchim) of Toronto and Jill (Matt Jenkins) and son Clark, of Calgary; his daughter Ruth (Trevor Mealy) and their sons Taylor and Hudson of Minto; his son Frank (Karen) of The Pas and their two sons Jared (Kendra) and daughter Everly, of Winnipeg and son Riley (Carly) and son Dierks of Red Deer; his brother Reg (Jean) of Brandon;  and twenty two nieces and nephews.

Andy and Ila were married at Elm Creek, MB in 1951 and celebrated 64 years of marriage on July 21, 2015.  He attended school at Coulter and Lyleton and in 1945, he went to Souris to work for his uncle Andy Murray.  He was employed at Murray’s Garage in Souris and Brandon Automobiles until 1971 when he and his brother Reg opened Lang Motors in Souris.  In 1993 he returned to work for Murray’s in Brandon until his final retirement in 2006.

He was also an avid hockey fan both as a supporter and player in his younger years.  He played senior hockey for Souris during the “Big 6” era and was on the team that won the Juvenile Hockey Provincial Championship.  He followed his sons’ and grandsons’ hockey careers with great interest and travelled many miles to watch them play.

Andy was a member of the Elks Lodge and was a past Exalted Ruler; as well as a member of the Masonic Lodge, Royal Canadian Legion and St. Paul’s United Church.  He was a great supporter of Souris, and was known by many for his friendly smile, warm nature, sense of humour and his kindness to all.  Since his passing, his family has been comforted by the many acts of kindness which have helped us all through this difficult time.  We truly appreciate the visits, flowers, baking and remembrances of a “special man”.

In lieu of flowers, donations may be made to the Souris and Glenwood Community Foundation Box 518 Souris, Manitoba R0K 2C0 or a charity of your choice.