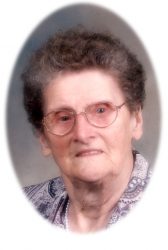 Eisler: Nellie Eisler passed away Thursday, April 4, 2013 at the Souris Personal Care Home at the age of 97. Nellie was born November 10, 1915, fourth child of Nick and Pearl Baduik. She married John Eisler December 2, 1936 and together they raised four daughters. John and Nellie farmed in the Lily District and retired to Souris in 1957. Nellie was a caregiver all her life, caring for John’s parents and then John until his passing in 1973.