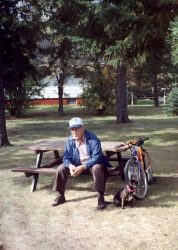 Fell: Allan G. Fell passed away June 11, 2015 at the Souris Health Centre after a brief illness. He is survived by daughters; Donna Dornian and Connie (Ken) Saban, grandchildren;  Shaune (Susan) Dornian, Kristine (Myles) Branconnier, Jamie Dornian, Adam (Carman) Saban, Stephen Saban and Cali Saban, Great grandchildren;  Austin and Gage and his little dog Butch. He was predeceased by his wife Margaret (Jones) in 2002 and his sister Viola Madams. After a brief stint in the Navy as a teenager, Al began his career with Manitoba Telephone System. He was stationed in various locations but settled in Souris where he raised his family. Al retired in 1985 and he and Marg spent many winters in Arizona and Texas. During the spring and fall he also worked for Prairie Gold Fertilizer delivering anhydrous ammonia to farmer’s fields. He made lasting friendships with his co-workers there. In later years, Allan focused his energy on his yard and the never ending battle with the pine cones and needles. His friend and neighbour, Wayne, was a great help to him hauling cones to the dump or clearing snow. The Royal Canadian Legion was a particular importance to Allan. He served as President on numerous terms. The family would like to thank the Legion Ladies and Honor Guard, and all who attended of sent flowers, cards or tributes. A graveside funeral service was held at the Souris & Glenwood Cemetery. In memory of Al, donation may be made to the Souris Hospital Palliative Care Fund c/o Prairie Mountain Health Box 10 Souris, Manitoba R0K 2C0.