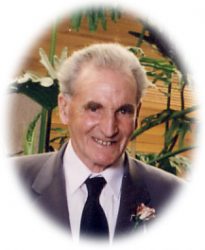 Wilson: Ross Langton Wilson of Souris MB (formerly of Nesbitt), passed away in the Souris Heath Centre on Saturday, June 6, 2015 at the age of 89 years.

Ross was predeceased by his wife Margaret on February 8, 2015.

He is survived by his 3 children, Bob (Susan) of Boissevain and their children Steven, Brodie (wife Bonni and son Blake) and Tari; Tom (Rita) and son TJ of Boissevain; and Kathy (Lyall) Keele and sons Reilly and Carter of Brandon.

Dad was born October 28, 1925 in the Morden (Thornhill) District Manitoba. On June 25, 1955 Dad married the love of his life Margaret Lewis.

In 1959 Dad and Mum moved up to the Wawanesa area to continue farming and in 1965 bought a farm in the Nesbitt area. In 2012 Dad and Mum relocated to Souris Manitoba.

Dad had two serious loves in his life. His first love was his wife Margaret. His second love was for farming. Dad finally gave up farming just a couple of years ago to help take care of Mum. A Graveside funeral service for family and friends was held at the Minnewawa Cemetery Nesbitt, Manitoba on Friday, June 12, 2015 with Rev. Brian Nelmes officiated. In memory of Ross, donation may be made to the Souris Hospital Special Equipment Fund c/o Prairie Mountain Health Box 10 Souris, Manitoba R0K 2C0 or to the Alzheimer Society.