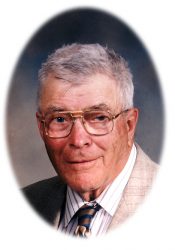 Finlay — Milton Roy Finlay passed away peacefully at the Souris Personal Care Home on March 7, 2014.  He was born April 2, 1919 on his parents’ farm near Goodlands, Manitoba.  He was predeceased by his wife Eleanor (Schmok) in 2008 and his birthday twin grandson Jason Hargreaves in 2009.  Roy was survived by five children, Ted (Joyce), Susan, Walter (Debra), Nancy (Jim Hargreaves) and Valerie (Harold Renn), four grandchildren, Aaron (Nicole) Hargreaves, Danielle (Paul Klick), Annette (Gerard Tetrault), Steven (Eleanore) Renn, eight great grandchildren Austin, Kohen and Walker Hargreaves, Louis, Kaylie and Cole Tetrault, Olivia and James Renn, sister Helen Meggison, brother-in-law Martin Schmok, sisters-in-law Myrtle MacKenzie, Thelma, Agnes, and Mary Schmok as well as many nieces and nephews. Roy attended Croydon one-room school house prior to starting farming with his father.  He met Eleanor when she was teaching at Croydon in 1940.  Serving in the Queen’s Own Cameron Highlanders of Canada from 1942 to 1946, Roy travelled from Prince Rupert, BC to Halifax, NS before being sent overseas.  He was posted to England and Holland but enjoyed leaves with extended family in Scotland.  He has been a member of the Royal Canadian Legion for over 65 years.  Roy and Eleanor were married in Vancouver in 1946.  They farmed at Goodlands 1946- 1968 and at Souris 1968-1997.  Roy drove a school bus from Souris to Brandon for several years.  He looked forward to auction sales, heavy horse shows and hunting season.  Roy curled when he was younger, and continued to follow curling and baseball throughout his life.  After they retired to Souris Roy loved going for coffee with the guys.  Roy and Eleanor enjoyed touring North America, especially visiting family and friends, and spent a decade of winters in Texas.  In 1995 the whole Finlay family (17 at the time!) went to Hawaii for Christmas holidays.  Roy felt privileged to attend both the 50th and 60th anniversaries of the Liberation of the Netherlands.  Roy spent his last years at Westview Lodge in Boissevain and Souris Personal Care Home.  Roy’s life celebration was held at St. Paul’s United Church in Souris on March 29.  In memory of Roy the family would appreciate donations to a Charity of your choice.