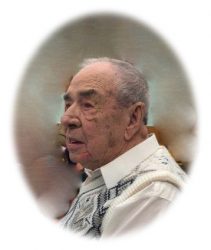 Andy passed away peacefully at the Souris Hospital March 4, 2014 in his 89th year. Andy was raised and educated in Carroll, Manitoba where he was one of fifteen children working on the family farm.

Andy married Barbara Yeo of Winnipeg in 1950 and they resided on the family farm until 1954 when they moved to Souris. Dad worked for the Souris Creamery for over twenty years. He then went to work for the Souris School as custodian and bus driver until his retirement in 1990. Dad was an avid outdoors man enjoying many hunting, fishing and camping trips with family and friends. He loved working in his shop and puttering in his garden.

Andy was predeceased by his parents, Richard and Silvie, nine brothers, four sisters, and his mother and father-in-law, Dennis and Clara Yeo. The funeral service was held in St. Paul’s United Church in Souris on March 8 and Andy was laid to rest in the Carroll Cemetery. The pallbearers were Andy’s six grandsons, Jason, Bryan, Matthew, Linden Swaenepoel, Dallas and Jordan Foote.