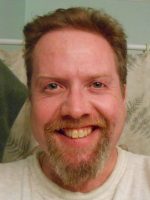 Stephen Arnett Groves, beloved son of Betty and Denny Philp, passed away suddenly in the Souris Health Centre on October 19, 2017.  Born in Boissevain on September 27th, 1971 to Arnett and Betty Groves, he grew up on the family farm at Carroll and attended school in Souris. He showed extraordinary artistic talent from a very early age.   In high school he developed an interest in music, especially the drums and enjoyed playing with various groups of friends.  The close friends he made at school became lifelong friends – adopting the name “The Dumb Guys”.  After graduating from high school he worked for the Souris Valley Echo for a short period and various jobs in Bandon, attended BU and the Alberta College of Art in Calgary. He free lanced as a graphic artist, writing and illustrating while working at a few day jobs. He returned to Brandon working from home doing illustrating and designing.

He suffered with respiratory problems from an early age and various other health issues. The diagnosis of cancer was devastating but he was prepared to battle it head on and come out the stronger for it. He dealt with the pain and debilities valiantly. His friends were a lifeline for him during his illness.

He was predeceased by his father, Arnett Groves and his brother, Andrew. He is survived by his Mother and Stepfather, Betty and Denny Philp, sisters Susan Groves and Erin Sutherland, stepsiblings Twyla Anderson, Jason Philp and Tim Philp, their partners and his beloved nieces and nephews.

To all our family and friends, thank you so much to everyone who attended Stephen’s funeral, some who travelled from afar. Thank you to the United Church choir, the UCW and Reverend Wendy Rankin for her moving tribute. Special thanks to Keith Edmunds, Jeff Tymoschuk and Ian Hart for their fine eulogy and my Sorority Sisters who provided supper for the family after the funeral. Thanks to those who sent cards, flowers, texts, messages, made donations in his memory, brought food and all who shared in our loss and supported us in so many ways this past summer through Stephen’s illness. Thank you to Drs. Dueck and Cram and all the medical staff in Souris and Brandon for their skilful care and compassion; your kindness has helped us immeasurably through this time of grief.

Thank you also for the fine care Denny has received during his three illnesses this summer. The thoughtfulness of friends and family while we dealt with two in our family being very ill is much appreciated.

Betty and Denny Philp and Family.