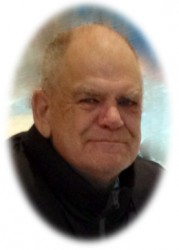 Ted was born at Shoal Lake, MB on December 23, 1945, second eldest to Jack and Irene Jenkins. He grew up on the family farm and attended school in McConnell, MB. In 1964 the family moved to Oak Lake, MB. Ted first worked at diamond drilling for a short time and then started road construction. In 1972 he married Joan Robertson, and they lived in Winnipeg where he was employed with CP Transport and then CP Investigations. In 1979 they moved to Shoal Lake, MB where he started his own feedlot cleaning business in the Shoal Lake/Oakburn area. They moved to Oak Lake, MB in 1983 where he worked for Lewis Cattle Oilers for a short time before going back to his passion of operating heavy equipment and road building. He worked for the RM of Sifton and various construction companies over the years building roads in Manitoba, Saskatchewan and Alberta.

Ted was very proud of his son, Aron and two daughters, Teresa and Shannon. He enjoyed spending time with them and their families. Memories of camping trips, fishing trips and trail rides were among some of our favorite times spent together. His grandchildren were very special and always brought a smile to his face. Besides hunting and fishing all his life, Ted had a way with animals and loved to train horses and dogs. Ted loved country and western and old time music, and dancing with his wife. He also loved to sit down and play a good game of cards. He was very proud of receiving the most popular driver trophy during his stock car racing days in 1968 in Dauphin. Another accomplishment his family has always been very proud of him for was saving two lives in a boating incident in 1966 credited to his strong swimming ability. Ted could often be found at the coffee shop. He loved teasing people and always had a joke ready to tell or a story to share. We will always miss his frequent warm hugs and the glint in his eye that went along with his mischievous grin.

A celebration of Ted’s life was held on May 10, 2014 at the Oak Lake Community Hall with Don Sellsted officiating. Our loving husband, father, grandfather, son and brother will be dearly missed.

If anyone so desires, donations in Ted’s memory can be made to the Heart and Stroke foundation of MB, #3-824-18th Street, Brandon, MB, R7A 5B7 or to the Canadian Diabetes Association, Western Region, Unit A1-800 Rosser Ave, Brandon, MB, R7A 6N5.