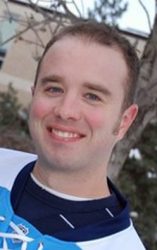 Robert William Wayne Keeler  With family by his side, Robert William Wayne Keeler passed away peacefully at the Carberry Health Centre on March 25, 2016 after a courageous battle with cancer.  Rob was born January 26, 1980 in Brandon, MB to Wayne and Audrey Keeler.  He grew up in Hartney, MB and attended school there.  During his childhood, Rob enjoyed spending time with lots of friends and his younger brother, Bryan playing different sports such as hockey, wrestling, baseball and golf.  Rob loved sports and was a huge fan of the Pittsburgh Penguins.  He enjoyed all types of music, reading biographies and had many favourite television shows.  He was a very kind and compassionate man who wore his heart on his sleeve and who loved and cared deeply for his family and friends.  He graduated high school in 1998 and from there, moved to Brandon, MB and attended University to pursue his Education degree.  While attending University, Rob made some very good friends and had so many great memories with all of them.  Once he received his Bachelor of Education degree in 2005, he spent a few years working term positions and substitute teaching at several schools around Brandon until he landed a teaching job at Riverbend Colony School (Southeast of Carberry, MB) in 2008 and was there for about 7 years.  In April 2009, Rob met the love of his life, Becky and they were married on July 30, 2011.  They bought a house in Carberry, MB in 2011 so Rob could be closer to his teaching job.  In March 2015, after a few months of suffering from stomach and back pain, Rob was diagnosed with Stage 4 Colon Cancer.  During the past year, Rob stayed positive despite everything and he fought hard but his illness proved to be too much of an obstacle to overcome.  Rob was predeceased by grandparents Ken (1975) and Marjorie (2015) Keeler and Ruggles and Rosa Brown (1984).  He is survived by his wife Becky (Smith), his parents Wayne and Audrey (Brown) Keeler, his brother Bryan (Yasemin), his niece Mya and numerous aunts, uncles and cousins.  A celebration of Rob’s life was held on Thursday, March 31, 2016 at the Centennial Centre in Hartney, MB with Reverend Doug Craig officiating.  Private interment was held in the Lauder Cemetery at 1:00 p.m.  If you so wish, in memory of Rob, donations may be made to:  Hartney Golf Course Box 271, Hartney, MB R0M 0X0; Cancer Care Manitoba Foundation INC 675 McDermot Avenue Room ON1160 Winnipeg, MB R3E 9Z9; or to the Lauder Cemetery Fund, Box 66, Lauder, Manitoba R0M 1C0.