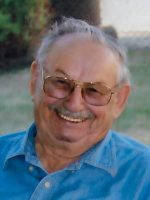 KOHUT: ANTON (TONY as he was known by his family and friends)

Tony was born in Rosa Manitoba August 9, 1925 and passed away peacefully on Friday morning, March 30, 2018 in the Souris Hospital.

He was preceded in death by his wife, Audrey (Doherty) Kohut, whom he married in 1948, and brothers John, Bill, Harry, and Mike.

Tony is survived by his three children; daughter Debbie Chambers and her children Reid and Courtney; son David, (Wendy Bilton), and children Greg, Richard (Alondra) their two children Angela and Danika, Katherine (Tony) their two children Cole and Brody, and stepson Johnathon Wedge (Kyla) as well as his only remaining sibling Anne Parham.

Tony was raised on the farm and started driving a tractor before the age of 10. He continued to do so for the next 82 years.  He began farming for himself early in life and was a pedigreed seed producer for 62 years.  He was anticipating “getting on the land” with in the next two months to begin this year’s crops.

Tony’s passion and love were farming, this keeper of the land “will be missed by his family and many who knew him.

Funeral reception was held at the Souris Legion Club Room Church on Monday, April 2, 2018 at 12:00 Noon. Private interment in the Souris & Glenwood Cemetery. In memory of Tony, donations may be made to the Heart & Stroke Foundation or a charity of your choice.