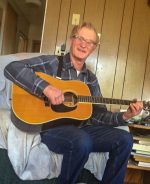 Edgar was born on May 17, 1934 in Hartney, Manitoba, and was the eldest of 7 children. He went to Deleau school to Grade 10. He was very musical and taught himself to play the guitar. In his younger days, he travelled around playing at various social events. He inspired the love of music in his children and grandchildren that continues on today. Edgar also enjoyed curling in the winter and occasionally played ball in the summer.

Edgar was married to Eva (Bertholet) from 1957 to 1971. They started farming outside of Hartney and eventually moved to the farm at Deleau, where they raised their 5 children. Edgar spent most of his time farming and even ventured as far as Flin Flon for work.

Edgar also served as a councillor for the Sifton Municipality from 1971-1973 and 1980-1998. He was very proud of this and made a lot of friends and acquaintances along the way.

Edgar semi-retired from farming and moved to the farm southwest of the home quarter, where he lived until he went into the Care Home. He spent his retirement helping neighbours, wrapping bales for other farmers, and socializing with his friends in Souris. Edgar and his best friend, Randy Franke, would take frequent trips to Brandon or Virden. He really valued these outings and enjoyed his time out and about.

Edgar moved into the Souris Personal Care Home this past winter after a few months’ stay in the Souris Hospital. The family would like to take this opportunity to thank the health care providers at both facilities for their excellent care and compassion during his last months.

In memory of Edgar, donations may be made to the Alzheimer’s society.