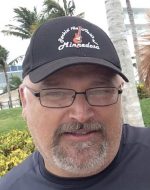 Logan, Alan William passed away suddenly on March 19, 2022 in Souris at the age of 54.  While taken from us far too soon, he nevertheless made a huge impact on this Earth with his infectious good nature and kindness to everyone he met. Alan is survived by his partner Deanna Way, mother Viola Logan, son Kyle (Pacience), daughter Alicia, brother Clark (Shari), nephews Brett and Tyler, Uncle Carl and Aunt Rose, and many cousins. He was predeceased by his father Gordon Logan, Uncles Cecil and Lloyd Logan, and Uncle Albert and Aunt Fay Long.

Alan grew up on a farm in the Griswold/Terence area, north of Souris in his early years and then moved to Souris with his parents Viola, Gordon, and brother Clark.  He attended Souris School and graduated in 1986.   A highlight during Alan’s high school days was football, as #67 offensive center for the Souris Sabres to which the team receive 1st place in 1983 and brought home the R.M.F.L. Provincial A Championship in 1984.

Upon graduation Alan worked for a few years as a security guard with Tasko Security and attended ACC to complete his Correctional Officer training, February 1987.   He became employed at the Brandon Correctional Institute in 1989 and spent the next 31 years within the BCI establishment.  Alan retired February 14, 2020.

Alan was a proud, dedicated and loving father to Kyle and Alicia.   He was a role model and coach for many of their activities and interest.   His own interests over the years involved baseball, fishing, hunting, camping and music.  He introduced Kyle and Alicia to music at a young age and relished taking them to concerts. His love of music and connection to the Minnedosa community led him become involved with Rockin’ the Fields of Minnedosa.  He was active as a volunteer and since 2019 was in the elected role of president.  His dedication, passion and vision for the festival were admirable qualities. He was looking forward to live concerts again in 2022 and was very involved in the planning for this year’s event.   He was most excited about the chance to ‘people again’ and just to reconnect with his RFM family and community.

Alan was always interested in the family history and artifacts. This led to a hobby centered on antiquing. He was always ‘picking’ and took great pleasure in finding just the right item at an auction or a place he was invited to look through.  He collected and sold items for many years, and as a result he became very well known in the antiquing community.   It was through this hobby he met his partner Deanna in 2018.   Alan returned to Souris, where he and Deanna lived, owned and operated a retail space of their ‘pickings’ and made a home together.  He enjoyed participating in various community organizations and became a member of the Souris Hillcrest Museum.  Alan was so happy he was able to do what he loved as a hobby in his retirement with a person he loved, in a town he loved.  A celebration of Alan’s life was held on April 11, 2022 at the Souris & Glenwood Community Hall with a private interment in the Souris-Glenwood Cemetery.

Alan’s love, compassion and soft spot for animals is another notable quality.  If he wasn’t donating to support furry friends, he was feeding neighbourhood cats, building shelters and being a loving and doting pet dad.  In lieu of flowers, in memory of Alan donations can be made to the Souris Dog Park c/o Municipality of Souris-Glenwood Box 518 Souris MB R0K 2C0 or to the Brandon Humane Society 2200-17 Street East Brandon, MB R7A 7M6.