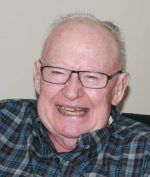 Matheson: David Maxwell Matheson, recently of Medicine Hat, Alberta, but long term resident of Souris, Manitoba passed away at the age of 89 years.  He leaves to cherish his memory three daughters, Bev (Jay) Hitchen and Cindy Matheson, of Medicine Hat, Alberta, Val Matheson of Winnipeg, Manitoba, four grand-children Steve (Amy) Hitchen, Koby (Claire) Hitchen of Edmonton, Alberta, Breanna (Tomas) Kulczycki of Winnipeg, Manitoba and Brayden Hall of Anola, Manitoba.  He was pre-deceased by his beloved wife Elsie in 2014, his siblings Norman R. and Edith Larson, and his parents Vera Maude and Norman Alexander.  David is survived by two sister-in-laws Margaret Matheson of Brandon, Manitoba and Alice Zimmerman of Carlyle, Saskatchewan, along with nieces, nephews, and great nieces and nephews.

David was born in Maple Creek, Saskatchewan on March 4, 1930.  He spent his school years living in Saskatchewan.  At age 17, he moved from Regina to Souris with his parents, when his father purchased Matheson Lumber.  During grade 12, David worked after school at the lumber yard, and on the last day of grade 12 he began full-time at the business. He remained managing the family business throughout most of his career.

On August 17, 1957, David married the love of his life, Elsie C. Henderson of Manor, Saskatchewan.  They had celebrated 57 years of marriage at the time of her passing.

In the early days David was active in the community of Souris through the volunteer fire department, the BPO Elks group, the curling club, the United Church, and attended many community dances, both as a couple and as a family.  There were camping trips and many trips to the farm in Manor, Saskatchewan to visit Mom’s family.  In later years, family and friends gathered at the Oak Lake cabin making memories.

Dad didn’t see himself as the wonderful man that we knew him to be.  He was gentle, honest, humble and kind.  He was a faithful and loving husband, father, and grandfather.  He was proud of his heritage, the town of Souris, and the family business.  He was a man with a strong loyalty to the community of Souris, customers, local businesses, family and friends.  He liked to keep busy fixing things, changing things, and buying gadgets to help him with those tasks.  He might get three of the same gadget if it was “on sale” as he loved a bargain.

Dad was fiercely independent all his life. When he was 87 living in the Souris PCH, he enjoyed his regular trips uptown with Handi-Transit to pick up some treats and maybe a tool or two, in case something needed fixing- it never occurred to dad to ask for help with tasks he thought needed doing.  Dad sure appreciated the drivers who accompanied him uptown.  Many thanks to the VPL and PCH staff too for their kindness and care over the years.

Dad’s sense of humor carried him through life’s journey.  He told jokes, loved to tease, and had sayings that we will never forget.  When we talked to dad on the phone, it was always a race to see who got the last word in, something like “I love you more, I love you MOST!”

A memorial service in celebration of David’s life was held at St. Paul’s United Church on Saturday, August 3, 2019 with Reverend Harvey Hurren officiating.   A time of fellowship and refreshment followed in the St. Paul’s auditorium.  A private family interment took place at the Souris-Glenwood Cemetery. In memory of David, donations may be made to the Heart and Stroke Foundation or to a charity of your choice.

We love you Dad so very, very much, and you will not be forgotten.