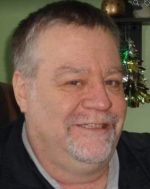 McBURNEY: Spencer Lloyd was born at the Souris Hospital on September 22, 1961 to William (Bill) and Margaret McBurney and passed from this life, July 1, 2019. He grew up on the family farm south of Elgin and took his schooling at Elgin Elementary and Hartney High Schools, where he graduated in 1979. He was always an excellent student and well liked by his teachers and peers.

Later, he returned to Manitoba and took on the tasks at Lucy’s Flowers & Gifts in Wawanesa. Cooking, pouring coffee, folding church bulletins, proofing the Lioness Express, handling Greyhound and Sears parcels, and delivering floral tributes were some of the things he took pride in doing, until due to declining health he was unable to keep on with those tasks.

Spencer is survived by his mother, Margaret McBurney, Sisters: Shirley, Leona (Grant Gillies), Barbara (Karl Cameron) and brother Garnet, as well as nephews, nieces and a grand niece and nephew. He was predeceased by his father William McBurney in 2000.

Spencer had a caring and gentle nature. He had an avid interest in music, keyboard, violin and later, clarinet. As a young person, he loved to share his alto voice in worship hymns and this deepened the faith he had for his Lord, God. He had a special relationship with Jesus Christ, which was evident in many of the conversations he shared over the years.

Having no children of his own, Spencer’s nieces and nephews were a delight to him, both as young children, and on into their adult lives.

Being adept at all things electronic, like computers, TVs, PVRs and all the latest phones and tablets, people were constantly asking his advice about how to make their gadgets work.

He will be very much missed by family and friends and will be long remembered with both laughter and tears. Rest in peace, Spencer.

If friends so desire, donations may be made in Spencer’s memory to a charity of one’s choice.

Funeral Service was held at Kowalchuk’s Funeral Chapel, Souris on Monday, July 8, 2019 at 11:00 a.m. Interment in the Elgin Cemetery.