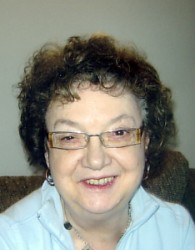 Donna passed away peacefully in Brandon at Fairview Personal Care Home at the age of 76.

Donna grew up in Ninette Manitoba. She was the eldest of four children and was predeceased by her parents Nicholas (1973) and Julia (1994) Andon  and brother Wayne Andon. Her sisters are Penny (Reginald) Pirchford of Winnipeg and Nancy (Bruce) Stemken of Winnipeg. Donna spent her youth in Ninette working at the restaurant which her parents ran for many years. She had a great love of life and had many friends throughout her entire life. She truly enjoyed the company of others.

Donna married Robert Wilfred (Wilf) Minary on April 16, 1959 at the Burbank Church near Nesbitt, Manitoba. Donna and Wilf had three children and nine grandchildren Mom will be dearly missed by eldest son Darwyn and Cindy (Jared, Adam, Cody and Kendra) of Souris, daughter Darla and Steve Shillington (Brandon and Brianna) of Carnduff, Saskatchewan, and youngest son Bradley and Lana (Brett, Reid and Kyle) of Gillam Manitoba.

The family would like to thank the many family, friends who have shown their support during this trying time. Special thanks to the staff of Fairview Personal Care Home who cared so much for Donna.

A memorial service will take place in the spring, announcements will precede the service.